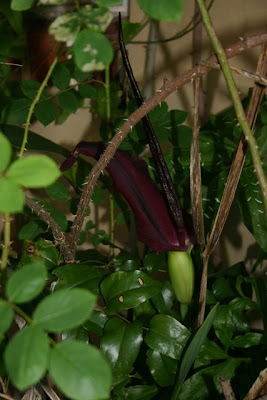 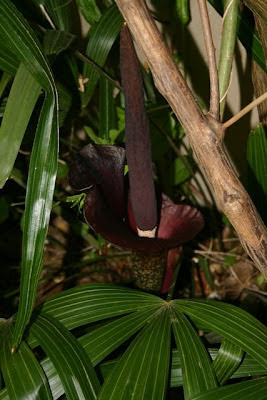 While checking the now mostly dormant bulbs in the protected cold frame the other day, I caught a whiff of putrescence. The only aroid blooming in the frame at that time was Arum byzantinum, so that was ruled out as a source. A dead animal seemed likely, so I began to hunt around. Then I remembered that the Dracunculus on the side of the house was about to bloom. I checked the dragon arum, and sure enough it was in odoriferous, reeking bloom. But that was not what I was smelling.

There was at least one other likely possibility, the Voodoo lily Sauromatum ( or if you prefer Typhonium). These, too, are starting to bloom around the garden. Their scent varies – typically it reminds me more of rat feces than anything else. But that was not what I was smelling.

Then I remembered something else, something which has not bloomed in the garden for years. Around the corner from the protected cold frame, under the Rhapidophyllum, in the shade of the Noisette roses and Smilax smallii, for years a plant of Amorphophallus konjac has appeared yearly without blooming. I took a look and sure enough, there it was, a chalky, brownish maroon spadix projecting up from the liver and maroon frill of the spathe. There it was, pumping out its particular stench.

The Dracunculus and the Amorphophallus grow against the same wall of the house, separated by maybe twenty feet. It was as if these two were competing with one another to see which could be the smelliest. And that’s when I had this hilarious thought: they reminded me of the two prime donne in Mozart’s opera Der Schauspieldirektor: only this time the performers were singing “I’m the biggest stink” “No, I’m the biggest stink”, “No, surely I’m the biggest stink” and so on.
I’m letting the flies decide this one.
In the images above, the upper image is that of Dracunculus vulgaris and the lower image is that of Amorphophallus konjac.
Posted by McWort at 11:06 AM No comments: 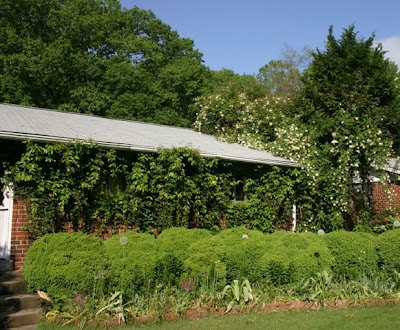 For the next two weeks or so our house will be in rose-covered cottage mode. In the image above, the pale yellow roses spilling onto the roof are the Noisette roses 'Claire Jacquier' and
'Alister Stella Gray'. Nearby is a shrub of the fine old hybrid 'Scharlachglut', and around the corner, out of view in this picture, 'Madame Gregoire Staechelin' covers one side of the deck. All of these roses are richly fragrant, and they have the sort of fragrance which is free on the air.
The two Noisettes are yellow in cool, dull weather; in our typically sunny warm weather they are a very pale yellow or cream color. 'Madame Gregoire Staechelin' blooms in a range of cool pinks verging sometimes to very rich pink-red. 'Scharlachglut' is a wonderful color: it’s not simply red. When the blooms first open under cool conditions, they are an amazing, rich velvety red. What’s more, the red has a warmth of color which is very appealing. It’s well named: as the name suggests, it really does glow. Such is the fragrance of this rose that even if the blooms were tiny and white, I would still grow it.
Posted by McWort at 9:12 AM No comments: 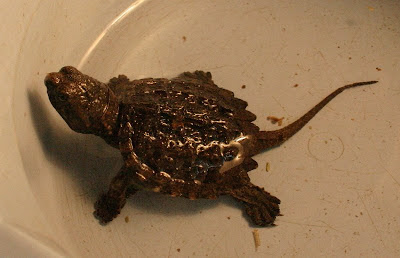 Several days of heavy rain earlier this week brought out the toads: these are now singing all day in the pond. It also brought out the little one shown above. I was looking out the front door and saw something odd on the sidewalk. At first I thought it might be a dead mouse washed in by the rain. But that didn't seem quite right. So I went out and took a close look and was surprised to find a baby snapping turtle. It seems to have a bit of egg tooth left, so perhaps it's a hatchling. I have a hunch that snapping turtles usually hatch out in the late summer or autumn, but I've heard that sometimes the hatchlings spend the first winter in the nest.

I kept Little Snappy in the house only long enough to get some pictures over a period of two days. Then it was released in the garden pool.

Like box turtles, snapping turtles are more likely to be seen dead on the road than alive in this area. But they are around and seemingly holding on well. Evidently they don't hesitate to travel overland. 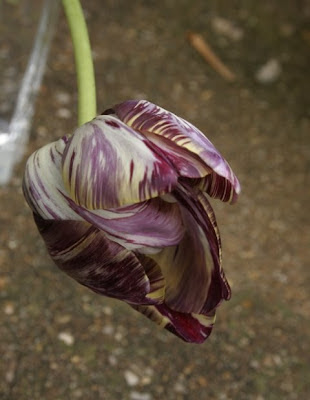 This post repeats one I made this morning on the Scottish Rock Garden Club Forum. The topic of the old virus infected tulips had come up, and one forum contributor expressed disbelief that anyone would pay, and pay well, for diseased tulip bulbs.

Let me try to explain.

The short answer is that there appears to be no substitute for the real thing. What are currently sold as “Rembrandt tulips” here in the US are at best crude imitations of the fine old broken tulips and do not remotely approach their rare, sophisticated beauty; particularly is this true of the best of the bizarre tulips which are my personal favorites. The modern Rembrandt tulips I have seen are as plastic child’s toys compared to the aged Morocco leather of the old bizarre tulips.

To be sure, the growing of virus infected tulips is a guilty pleasure: most of us who grow them know better and should probably not grow them. But they are like a drug: once you have succumbed to their peculiar charms, you are hooked for life. These are tulips to be admired individually in the hand, in the cozy, warm comfort of familiar domestic surroundings, as if one were living in a Vermeer painting. Perhaps the glass you hold in your other hand will contain a libation of similar muted, dark hues, layered character and ancient history. Savor each slowly, as their quality deserves. You will look at other tulips as the worldly man looks at the country bumpkin, and perhaps make comments about the rude good health of these everyday tulips. I’m not saying this is right or admirable, I’m just saying that this is what often happens.
I gladly gave my innocence to these tulips when I was a teenager, and I’ve never regretted it.
I’ve learned to live with the guilt.

That's 'Insulinde' (or 'Insulinda') in the image above.
Posted by McWort at 9:22 AM No comments: 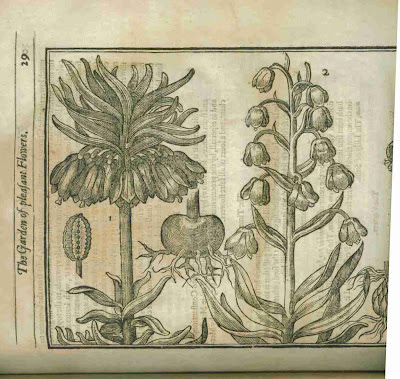 This post is essentially a repeat of one made this morning on the PBS forum.
I’ve admitted to my failure with Fritillaria imperialis in the past, and it’s not simply Schadenfreude which now gives me pleasure when I consider that I am evidently in the distinguished company of some very accomplished growers.
How many of you know William Walsh's poem Rivals? It expresses well my feelings about my love affair with Fritillaria imperialis. Walsh died in 1708; here it is from the Oxford Book of English Verse, with the text slightly modified (and the meter massacred) to fit this topic:
Of all the torments, all the cares,
With which our lives are curst;
Of all the plagues a lover bears,
Sure rivals are the worst!
By partners in each other kind
Afflictions easier grow;
In love alone we hate to find
Companions of our woe.
Corona imperialis, for all the pangs you see
Are labouring in my breast,
I beg not you would favor me,
Would you but slight the rest!
How great soe'er your rigours are,
With them alone I'll cope;
I can endure my own despair,
But not another's hope.
My apologies to the memory of William Walsh, who probably would have known this plant as Corona imperialis.
Generally speaking, I think it’s a mistake to dwell too much on failures – I suspect that even the worst growers among us have enough imagination to fabricate explanations for the failures. Focus instead on successes – not that they are necessarily any easier to understand.
And I have a success to focus on. Sometime back in the early 70s I received a dozen bulbs of Fritillaria imperialis from a Dutch supplier; they were mailed directly to me from the Netherlands (not that that made a difference). I planted them here and there around the garden. As usual, all bloomed magnificently the first year. Several returned the second year without bloom. By the third year, only one remained. That plant was planted under a copper beech. Also, and don’t hold me to this, I vaguely remember dumping a full eighty pound bad of ground limestone or hydrated lime on that spot.
For the next ten or so years that one surviving plant reappeared but never bloomed. Then it began to bloom, and for about another ten years it bloomed yearly. It was eventually a huge plant, easily four feet high and with proportionately large flowers.
Then one summer I dumped a wheelbarrow load of something on the crown imperial site, and that was the end of it – it never reappeared, and when I dug down to look for the bulb there was nothing there. But it had survived for about twenty years, and that experience made me a believer.
I’ve noticed that when growing in the shade of deciduous trees, Fritillaria imperialis is one of those plants whose foliage expands noticeably as the trees leaf out. I take that as a hint that it is adapted to life in the shade of deciduous woody plants.
In a small little tended garden I know in the valley of Virginia (i.e.
between the Blue Ridge Mountains and the Shenandoah Mountains) a plant of Fritillaria imperialis grew for years. The climate there differs little from the climate here: winters are of comparable severity (perhaps a bit colder
there) and summers are comparably hot and humid and sporadically wet. But there is one significant difference, and it’s readily observable to the experienced gardener. The garden flora there is a bit different because the soil there is full of lime. The garden in question is on old farmland, and the autochthon is by nature full of limestone.
Might something as simple as pH or readily available calcium be the answer to the culture of this plant? I put that hypothesis to the test last fall with a few bulbs of both Fritillaria imperialis and F. persica (and also F.pallidiflora, another species whose stature gives it potential value as a garden plant). I loaded the planting site with ground limestone. It’s too soon to tell now because they’ve just finished blooming, but in a few weeks I’ll be getting hints on their prognosis. These bulbs are in a spot exposed to sun for several hours during the middle of the day.
If this iteration of the experiment does not work, I’m game to try again next year in a site under deciduous trees. Also on the roster: trials in gypsum and in a non-acid forming sulfur source.
Several dozen other species of Fritillaria have proven to be manageable
here: you would think I might grow the crown imperial, too. I’m not ready to give up yet.
In the image at the top you see on the left Fritillaria imperialis and on the right Fritillaria persica as they appear in Parkinson's PARADISI IN SOLE Paradisus Terrestris of 1629.
Posted by McWort at 1:28 PM No comments: