First snake of the season 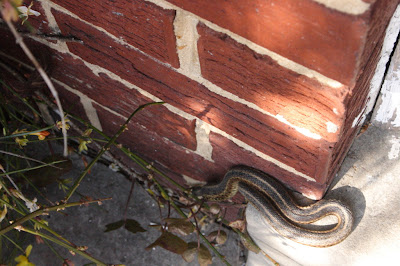 Late last October there was a post about a garter snake which appeared on the winter jasmine at the front door. You can see that here:
http://mcwort.blogspot.com/2012/10/thamnophis-sirtalis-unexpected-visitor.html

Yesterday, when I opened the door to get the  mail, I spotted what seems to be the same snake sunning itself at the front door. I carefully closed the door and went for my camera. When I got back and opened the door again, the snake slowly started to move. The picture above isn't great, but I'll bet it's the same snake: "our" garter snake.
Posted by McWort at 2:57 PM No comments:

It may be true that there is no accounting for people’s tastes, but you can’t help but wonder. This is the time of year when the tidy yard folks are out there demonstrating their superior good taste by mulching their shrubs and trees and anything else which gets in the way. There is no disputing that the result can be visually satisfying. But vision, although it is the strongest of our senses, is not our only sense.


Who would have thought that even in the garden, beauty must suffer.  Local gardens now are full of daffodils, early plums and cherries, magnolias, hyacinths, the earliest tulips and lots of odds and ends which might tempt one to linger and enjoy both the visual beauty and the olfactory pleasure. But just as you settle into enjoying the dreamy, languor inducing aroma of the magnolias, things go terribly wrong. The wind shifts, and suddenly the neighbor’s mulch asserts itself. Rudely shaken from your reverie, you bolt aimlessly to escape the offensive assault. That mulch reeks of vomit.
But it sure looks pretty.
Posted by McWort at 2:48 PM No comments: 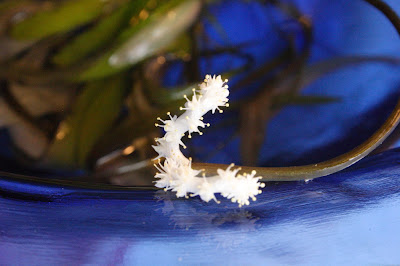 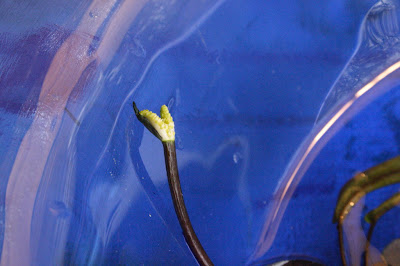 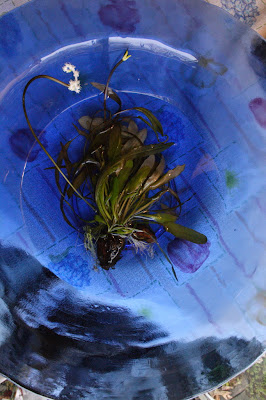 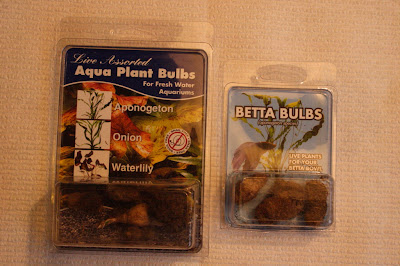 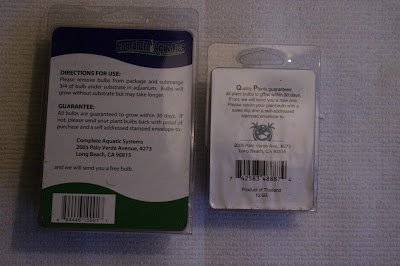 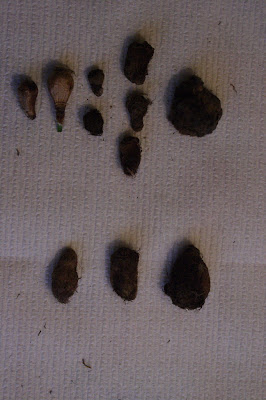 An early February thread on the Pacific Bulb Society discussion group touched briefly on aquatic crinum. At first the focus was on Crinum thaianum, a species described on the one hand as endangered and on the other hand as readily available in the aquarium trade. Eventually it was mentioned that dry bulbs for aquarium plants were being sold in some shops - not as actively growing plants but as dry bulbs sold in a clamshell package. This really got my attention, so off I went to two local aquarium stores.

At the first shop I asked for Crinum thaianum and got a blank stare. But then the cranial bulb began to flicker, and the aquarium guy said something about "crinium". Off we went to check out the selection. They did have an African species with decorative foliage, but not C. thaianum. And their plants were in active growth, not dry, dormant bulbs.

At the next shop, my first impression was dismal. Things didn't seem too promising. That's because my aquarium sensibilities never advanced much beyond 1960. After looking around for a bit and not seeing anything, I finally asked. A query about Crinum thaianum brought no response, but when I mentioned "bulbs" I was ushered into what for me was a new world. We walked away from the aquariums and instead he left me in front of a display rack/shelf of the sort you might see in any dry goods store. He pointed, and I didn't see. But I was looking right at them. There they were, row after row of little plastic clamshell containers each of which held what at first glance looked to be little oval lumps of dry dirt.

My first thought: these are alive? I was assured that they were. So I bit: I bought one box  of the "Betta Bulbs" and one box of the three-in-one combo. As soon as I got home I took some photos and then got the bulbs into water. That most of them floated like corks was not encouraging. I decided to save the boxes with their guarentee and the address to which I could apply for a refund.

Now fast forward about a month and a half: the Betta Bulbs, which were identified on the box as a species of Aponogeton, have not only surged into growth but are blooming! The sweetly scented flowers are nothing to look at, but this whole affair is certainly interesting.

I have no idea which Aponogeton these are. IPNI lists 142 names assigned to this genus, and the Wikipedia entry suggests that there are between 40-50 species.  The branched inflorescence suggests that of the southern African A. distachyos (distichous in English means in two rows or segments), but the individual flowers are not as conspicuous. A. distachyos is sometimes available in the ornamental pond trade, and has a long history of cultivation in England. The Missouri Botanical Garden site suggests that it will survive in ponds in USDA zone 6 climates as long as the tubers do not freeze.

I vaguely remember that when I was a teenager I obtained some of these dry Aponogeton tubers and sprouted them.

The three images at the top are of the "Betta Bulb" Aponogeton. Of the three obtained, one is in bloom, one is about to bloom - so maybe I'll get seed. Then there are two images of the clamshell boxes, and finally a line up of the items in the box. Of these, the bottom three are the Betta Bulb Aponogeton. The ones in the upper row are problematic, but the two on the left might be Zephyranthes candida (a suggestion from a PBS member), the five in the middle are probably more Aponogeton, and the one on the left might be a Nymphaea (waterlily). We'll see - or maybe we won't, because the maybe-waterlily is hard and floats like a piece of wood.
Posted by McWort at 1:17 PM 2 comments:

Petroselinum crispum root parsley: A surprise vegetable tells the rest of the story. 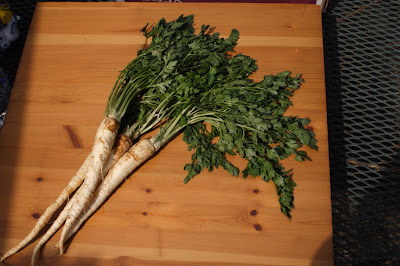 For most of you, the vegetation shown above will probably be unfamiliar. I’ve known about it all my adult life from reading, but until the other day I don’t think I had ever encountered it in a grocery store. It’s what in the old days was called Hamburg parsley (and by old days I mean when Hamburg refered to the city, not to a meat patty), but it was also known as root parsley or parsley root among other names. It is a form of true parsley. The foliage is coarser and rougher than that of the usual culinary parsleys such as the curled sorts or the flat leaf sorts, and the flavor is a bit more assertive. The entire plant is edible. I’ll boil the chopped roots with potatoes to make parsley flavored mashed potatoes tonight.

A year or two ago I was listening to a local radio broadcast for which several local vegetarians were being interviewed. One of them got on the topic of parsnips: she woke up everyone who knows parsnips  with this claim: after you have eaten the parsnip roots, be sure to eat the greens attached to them because they are parsley. In fact, not only are parsnips and parsley different species in different genera, but some people have an allergic reaction to parsnip foliage! See the Wikipedia entry for a discussion of the phytophotodermatitis which can result from contact with parsnip foliage.
How in the world would someone with an interest in vegetables come to make a claim like that? When I was picking out my root parsley at the grocery store the other day, I think I was shown how. As I picked up the bunches of root parsley (imagine white carrots with a bushy head of parsley-like foliage), a woman who had been watching me finally asked “What are those, parsnips?” They do look like parsnips. As I heard that question I thought back to that radio broadcast: I’ll bet that the young woman who made that terrible mistake about parsnips and parsley had sometime been around someone who used root parsley as a parsnip substitute in cooking –or, maybe it was just someone who never learned the difference and thought the root parsley was a form of parsnips. Maybe they had been using root parsley all that time thinking they were parsnips with edible leaves.

I don’t think you will ever see parsnips sold in the grocery stores with their leafy tops still attached: carrots yes, root parsley yes, but not parsnips.

And should you ever brush against parsnip foliage (it’s a common weed locally) keep the area touched by the foliage out of the sun until you get home and can wash it off.
Posted by McWort at 1:24 PM No comments: 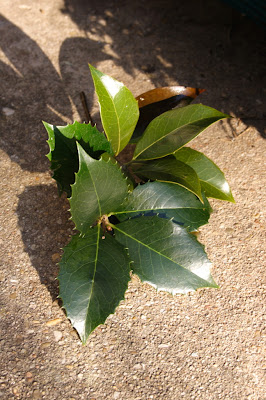 In the image above are two branches taken from the same plant of Osmanthus × fortunei. The branch in the foreground, with spiny, holly-like foliage, is the form typically seen in nurseries. But after the plant becomes established in the garden, something interesting happens: it begins to produce branches whose leaves lack the spines and have a more rounded form. Typically this change takes place in the uppermost branches only: the lower ones retain the spiny leaves.

This also happens in Osmanthus heterophyllus, one of the parents of the hybrid Osmanthus × fortunei.

This name Osmanthus × fortunei is the name for all hybrids of the given parentage. Had the name been written Osmanthus 'Fortunei' , that would have indicated a particular clone or cultivar, which is not the case here. If the form I grow has a cultivar name, I'm not aware of it.
Posted by McWort at 5:56 PM No comments: 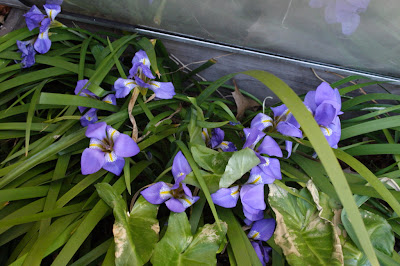 Iris lazica is blooming freely now, and the big blue flowers are certainly welcome at this time of year. It's very similar to, and related to, Iris unguicularis. To tell the truth, I'm not sure how to tell them apart. Iris lazica has the reputation of being hardier than I. unguicularis, and for garden purposes it might be a better choice because hardier or not it generally blooms later. This year the two were in bloom for several weeks together.
The plant of Iris lazica growing here is in a cold frame, but I've seen it in the open garden in other local gardens.
Posted by McWort at 5:14 PM No comments: