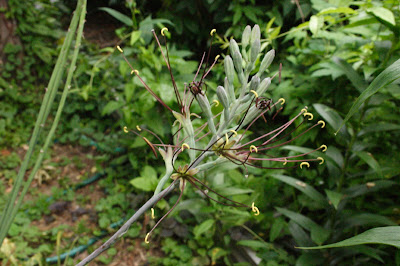 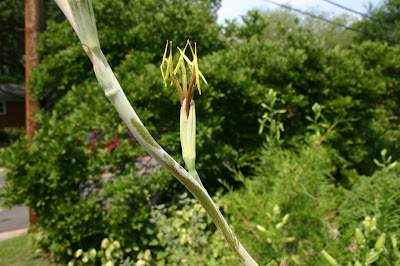 The upper image is of the inflorescence of Manfreda undulata 'Chocolate Chips'. The lower image is of the inflorescence of Manfreda virginica. Manfreda are so closely related to tuberoses (Polianthes of various species) and agaves that they will form viable hybrids. Manfreda virginica is hardy here; I keep 'Chocolate Chips' in a cold frame during the winter for now; I'll try it in the open after it pups a bit.

It took Manfreda virginica years to build up to blooming size; when it finally did the scape was seven or eight feet high. The inconspicuous flowers were not fragrant as far as I could tell - that was a big disappointment. I had been growing it with the idea that it would be a sort of hardy tuberose.

'Chocolate Chips' was obtained in 2010, so it has been by comparison quick to bloom, especially for a pot grown plant. The rosette of foliage is only about a foot across, so this is not a big plant. But the scape quickly pushed up to the five foot level. My experience with the flowers of M. virginica did not prepare me for the flowers of 'ChocolateChips': they''re not showy, but they are definitely unusual and in their way eye-catching.

When I described the flowers of this species on the Pacific Bulb Society forum this week, another contributor, Nan,  responded with the information that she thought the inflorescence looked like a cluster of daddy long legs (aka crane flies). What a great description!

'Chocolate Chips' does not smell like its namesake. It has a very odd scent - my first impression was that it smelled like hot metal. But there is also a fermented fruit quality to the scent, too. What pollinates the wild forms of Manfreda undulata? I'm guessing bats.

Posted by McWort at 8:47 AM No comments: 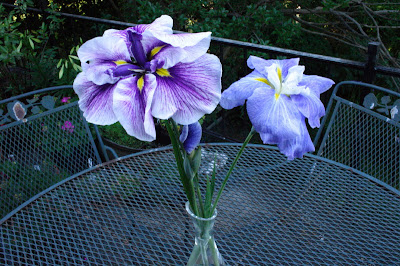 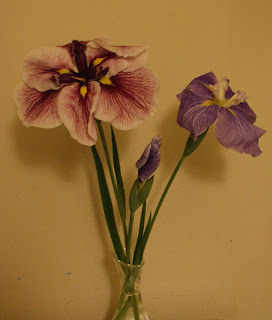 The poppies of the community garden field in the previous entry are all lightness, bright color and cheer.

Back in the home garden, the high drama of the Japanese irises is reaching a peak. Somehow these huge irises escape being ponderous in spite of their sombre colors, the substance of the petals, the solid form and the stiff bearing, And yet each iris flower typically lasts no longer than one of the poppy flowers.

Japanese irises have a devoted following, are readily available in the trade, and have been grown in this country for well over a century. Yet they are not often seen in gardens, certainly no where nearly as often as the various bearded irises. Nor are they more difficult to grow than the bearded irises. Nor do they compete with the bearded irises in season of bloom: among the widely available irises they are among the last to bloom.  And to see them well grown is to want them. Yet I don't see them in gardens that often.

Those with somewhat muddled color patterns  remind me of the Japanese morning glories more than some sort of iris. Those with dark pin stripes against a white background pull off this effect as well as the arilate irises.

Two photos are given here. The first one shows them in natural light. The exposure of the second photo was  deliberately manipulated to produce the sort of effect seen in color illustrations in books from the early part of the twentieth century.   I obtained these years ago from a sale sponsored by the local iris society. The names were carefully recorded in my notebooks, and labels were buried with the plants. I've not been able to find the labels buried with the plants, and the names recorded in my notebooks do not match images brought up in Google Images.
Posted by McWort at 12:47 PM No comments: 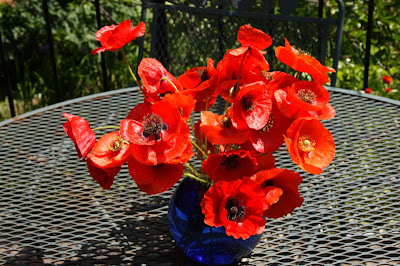 The corn poppy season is rapidly coming to an end here: this might be the last substantial bouquet I get this year.

If you go out into the garden during the middle of the day and pick poppy flowers, they soon wilt. The poppy literature mentions two ways to avoid this wilting, and Celia Thaxter suggests a third. The two ways usually mentioned are 1) to sear the cut end of the stem in a flame; I have not tried this method. And 2) to pick the unopened buds the evening before the flowers are wanted. As the buds develop they hang down; when they are about to open, they become upright. They can be gathered as soon as they become upright. This is perhaps the most charming way to gather poppies, because the cut buds can be presented the night before, then the recipient has the pleasure of watching the buds pop open and drop the hairy calyces on the table top the following morning. Once the calyx falls, the crumpled petals of the flower slowly expand: it's hard to describe how beautiful they are at this stage. So much about these poppy flowers is improbable: the thin, flexuous stems; the comparatively big expanded flowers; the intense color; the delicacy of the pollen dusted dome of anthers at the center of the blossom; the crepe and satin like quality of the expanding petals and the pepper shaker at the center of the flower. Any child can grow them, and I'd be concerned about any adult too sophisticated to appreciate them.

Now here's the other method for picking them, a method suggested by Celia Thaxter over a century ago:  pick the opening flowers at sunrise. I've done this three times this year; the two times I picked the opening flowers at about 6 A.M. (sunrise here is at about 5:45 now) they held up beautifully and developed fully. The one time I picked them at about 7:30 A.M. they did not last.

It's too late to plant poppy seed and expect to get great results, but it's not too late to start reading Celia Thaxter's An Island Garden.
Posted by McWort at 12:02 PM No comments: 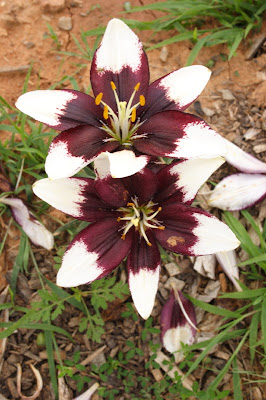 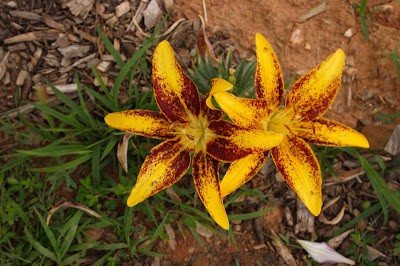 The lilies shown here are (above) 'Tiny Padhye' and (below) 'Tiny Sensation'. These are new to me and were planted last November or early December. Evidently they were bred to be very short, yet the flowers are comparatively enormous.

'Tiny Padhye' has a color patern very similar to that of 'Netty's Pride', but the flower of 'Tiny Padhye' is bigger and the color contrast even more vivid.
Posted by McWort at 12:13 PM No comments: 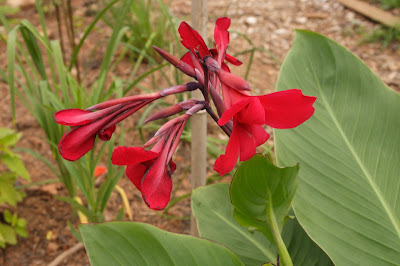 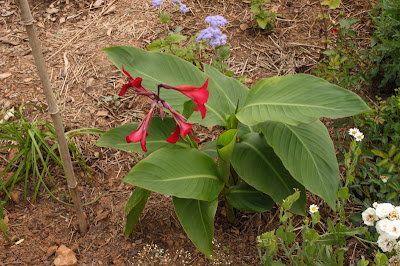 Canna 'Ehemannii' is already blooming! This canna went through the winter dry in the clump of soil with which it was dug. It retained viable foliage - it never died down to a dormant rhizome as most cannas do. The foliage was in very dim light most of the time, really almost in the dark - but it persisted. Once the weather relented, the clump was placed outside in a place not exposed to full sun to allow the foliage to firm up. Once it got water, it surged into growth.

Last year this did not bloom until very late in the season; there are several other sprouts on the way up, so this one might be in bloom throughout the summer. The plant shown above is only a bit over two feet tall - later sprouts will easily go to double that and more.


Things are happening so fast this year! I feel guilty that I am not keeping more extensive records, but with everything rushing into bloom at once, it's hard to keep up.

Here are some photos of the community garden plots taken within the last few days. The poppies are nearing the end of their blooming period, the larkspurs are at their peak and the lilies are catching up. As of today, there are Asiatic hybrid lilies in bloom, LA hybrids in bloom and trumpets in bloom. In most years trumpets begin in late June and spill over into early July. The lilies in these photos were all planted from newly received bulbs last November and early December. I planted generously in order to have lots of lilies to cut in support of the local lily shows. It's not to be: foiled again by that trickster Mother Nature.

Early or late, they're all beautiful..
Posted by McWort at 11:45 AM No comments: