Butterflies are not the only ones who love them; I do, too! And some of the modern ones are a big improvement over the old ones. 'Buzz Magenta', seen above with 'Black Knight', is both floriferous and compact.
To get the most out of them, the spent flowers have to be removed. If you have the time to do that, you'll get flowers right through the growing season. If you don't have the time to remove the spent flowers on all of your bushes, concentrate on one.
Their fragrance reminds me of honey.
These plants are easily propagated from cuttings.
For generations the name was spelled Buddleia. I'll bet most people in the English-speaking world were shocked when the spelling Buddleja appeared. But you have to remember that this word Buddleja is not simple English (although based on an English family name): what looks like the letter "J" to us in not that letter at all. It's in fact the semivowel form of the the Latin letter "I" (which, to continue the confusion, is pronounced "ee"). Since the eponym's name, Buddle,  was probably pronounced to rhyme with "puddle", and since the semivowel is pronounced "ya", a sensible pronunciation is "BUD-ul-ya".  Well, at any rate, that's sensible to me.
Note from early evening: this post was written in the morning when I brought the bouquet in from the deck outside. After the bouquet had been inside for a few hours, I began to notice that the scent is very free on the air - it had filled the kitchen and was noticeable in nearby rooms. The very pleasant scent reminds me of that of a meadow in full bloom. More, please...
Posted by McWort at 12:26 PM 2 comments:

Wow! Wow! Wow!
The color on this one is hard to believe! And the images above do not do it justice. It reminds me of the color of some Tibouchina.
What is it? It's a species of Exacum which will be new to most of us. The genus Exacum has been represented in gardens for a long time by the tender winter annual Exacum affine . This was grown (as a winter window plant) for its light blue flowers and sweet scent. It's native to Socotra, a relatively isolated island now a part of Yemen.
Exacum trinervium on the other hand is native to Sri Lanka (Ceylon), and some wikipedia accounts suggest that it is threatened in nature.
These plants are members of the gentian family.
The cultivar name 'Kandy' will probably suggest "eye candy" to some people, others will probably assume  it's one of these annoying misspellings which attempt to be cute, but I'll bet it is a pun on an ancient name of Ceylon: the Kingdom of Kandy.
Posted by McWort at 1:13 PM 1 comment:

I was tempted to call this post "auricula-eyed verbenas", but I'm not sure if these modern eyed verbenas are identical to the ones called "auricula-eyed" more than a century ago. In doing a Google search, I also learned that there are modern seed-grown strains of sweet williams which are called auricula-eyed. I'll be on the lookout for those.

Verbenas in solid colors are handsome as bedding plants, but for cutting I prefer these with the white eye. The eye gives them an old-fashioned charm lacking in the ones with solid colors. Those in the image above are probably two of the modern Quartz strains.
Posted by McWort at 5:19 PM No comments:

Poppy in search of girl 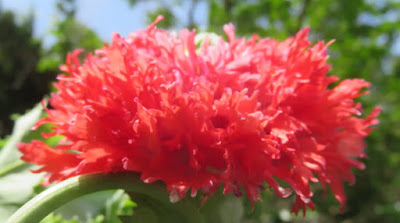 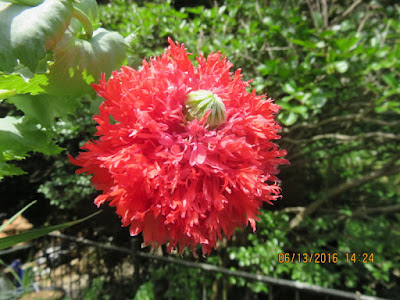 Does this poppy flower remind you of anything? It does me: I can't look at it and not be reminded of Vermeer's painting Girl with a Red Hat. Here's a link to the Vermeer painting - see for yourself!

Poppies like this were well known in Vermeer's seventeenth century Delft.

This poppy is one of the ones often sold under the bogus names Papaver laciniatum and Papaver paeoniflorum; in fact, it's one of the many cultivated garden forms of the opium poppy. Unlike the more familiar corn poppies, forms of Papaver rhoeas, these garden opium poppies produce comparatively huge flowers - the name paeoniflorum, which means peony flowered, is no exaggeration. On the other hand, unlike the corn poppies, they have a very brief season of bloom, and the individual flowers are not likely to last more than a couple of days in our climate.

Here's a link to more information about Vermeer and the art world in general: