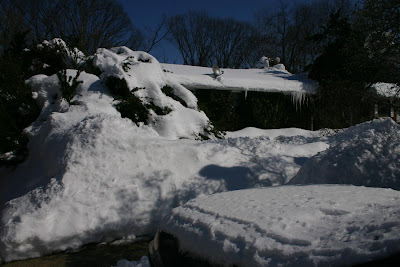 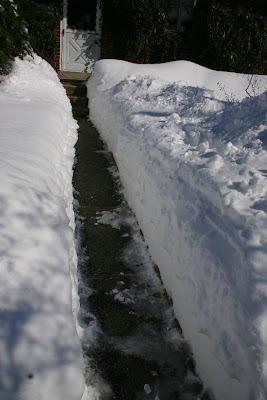 The boxwood arc is buried under this mass: 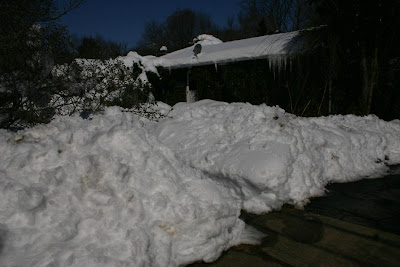 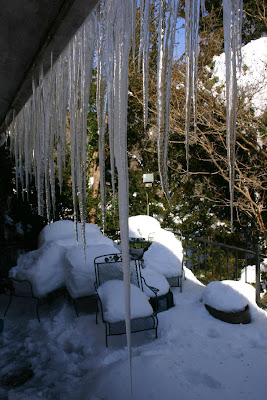 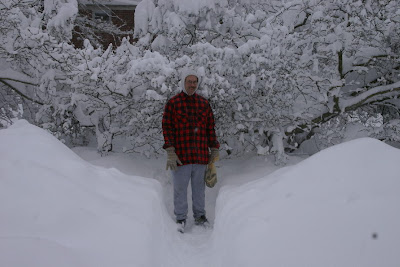 I'll start to post images of the damage soon.
Posted by McWort at 7:29 PM No comments:

Years ago Wayne lived in a building near the zoo. One morning we walked up to the center of Adams Morgan and had breakfast at Avignon Freres. It was a perfect morning, and I had given free reign to my senses to take it all in. The café/bakery/restaurant was busy but not oppressively crowded. There was live music: someone playing baroque recorder music. In the air were the commingled fragrances of good coffee and baked goods. I asked for eggs Benedict, and when it was served it was so beautiful I could hardly bring myself to eat it. What made it so handsome was the use of black olive slivers sprinkled on the eggs and a couple of fresh parsley leaves.

I was reminded of this a few weeks ago when I started to make the Greek eggs described in the previous entry. Something about the color of the black olives allows them to harmonize beautifully with the yellow of the cooked egg yolks, and the pieces of green leaf provide a cheery accent; the whole is handsomely set off by the brilliant white of the egg whites. There is something so fitting about the combination of those colors. It was one of those effects whose total impact was all out of proportion to the meager means used to achieve it.

I know I’m not the only one who misses Avignon Freres – and its bisque ice cream!
Posted by McWort at 12:56 PM 13 comments:

Off to a good start 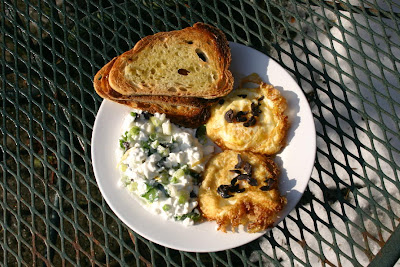 Here’s a photo of my breakfast this morning: eggs deep fried in scorching hot olive oil, crusty bread spread with garlic infused olive oil then toasted and cottage cheese with minced scallions and cilantro and lemon zest – everything sprinkled with black Marmara olives. Believe me, this is a great way to start the day.

I've been reading Susanna Hoffman's The Olive and the Caper, a book about Greek food. She calls these deep fried eggs Greek eggs. I mentioned to my Greek neighbor Nick that I was making Greek eggs lately. I had to explain to him what I meant. When I did, he chuckled and said "I haven't had those since my grandmother made them". To put that into perspective, Nick was probably born sometime around the First World War, and is thus just beginning his tenth decade.
Posted by McWort at 12:32 PM No comments:

Digging for gold in the snow

I worked up the courage to uncover the most protected cold frames today. It was hard to get to them: when the neighbors cleared the snow from their driveway, they heaped it onto our lot. The cold frame area is surrounded by a three foot deep dyke of snow.

I have not yet opened the frames (there is still snow around the edges, and the space is so tight that I can’t easily get to it). But I got the snow off, and pulled back the protective tarps, and now light can get into the plants. They have been in the dark for….well, I forget just how long they have been covered up. The sunlight is intense at this time of year: it’s really pleasant to be outside now when the sun is shining – it’s actually very warm on the skin. And since almost everything is still snow covered, the overall light intensity is terrific.

Now that I’ve had a look, I can say that the news is good: there are no obvious signs of cold damage. At least one of the Chilean Tropaeolum (I’m obsessed with these this year) looks fine – I can’t see the other one yet.

From what I can see, everything looks just as it did when I covered things up before the last big snowfall. Not all of the plants in the frame are bulby things: there are some gerberas (in bloom) which seem to be taking to cold frame life very well. The big red Persian cyclamen is entering its fourth month of bloom. Some garden forms of Primula vulgaris seem to be in suspended animation: they don’t seem to have changed in weeks – the bright flowers go on and on.

The biggest surprise from this effort today came not from a plant actually in the cold frames but rather from one which grows wedged between the two cold frames: Iris unguicularis has a nice fat colorful bud up. And when I went in closer to examine this, I could see another flower of this iris which had evidently bloomed under the tarps and was not withered. This one is a real trouper!

What I call my Christmas snowdrop, which has been blooming since mid-December, is still blooming.

And a rooted cutting of Daphne odora is blooming sweetly.

Mourning doves, northern cardinals, Carolina chickadees and titmice were all singing this morning. The birds are obviously responding to the increasing length of the day rather than to the immediate conditions here in the garden.

In mid-April I probably would not take a second look at any of these things. But when you have to dig them out of the snow, they’re precious!
Posted by McWort at 12:56 PM No comments:

A question arose on one of the on-line discussion groups about when it would be safe to send tender plants through the mail to someone in the greater Washington, D.C. area. The intended recipient of the plants (I fully understand his impatience) thought sometime in early March would be safe.

That younger gardeners feel that way shouldn’t be too surprising. The traditional safe planting date for tender plants (tomatoes, eggplants for instance) used to be May 5.

In recent years, the last damaging frosts have occurred in early April, a full month before the traditional date. However, there have been years when there have been prolonged hard freezes in mid-April: I have photos of tulips and crowns-imperial in full bloom, frozen hard, and they remained that way for a full day or two.

The big box stores yearly push the planting urge earlier and earlier with truck loads of plants grown far south of here. It’s not unusual to see New Guinea Impatiens, Tagetes marigolds, Salvia splendens, ageratums, fibrous begonias, tomatoes and other extremely tender plants being sold in late March. This must make the nursery business very nerve wracking because such plants have to be moved around a lot to keep them from freezing at night, and there must be a long line of disgruntled buyers who take their plants home only to see them die in a few days in an overnight freeze. It’s crazy.

Not only is it crazy, it has trained the gardening public to ignore the potentially long season of bloom which can be gotten (at minimal expense) from truly hardy annuals. A whole season of bloom and its traditional plants have all but disappeared from our gardening experience and tradition. A whole generation of well-heeled but not well-read gardeners has supplanted the older, slow-lane gardeners who knew how to get the greatest variety and satisfaction out of their circumstances with the least cost.

I don’t want to see a Tagetes marigold in my garden blooming next to a tulip.
Posted by McWort at 8:59 PM 2 comments:

The temperature this morning at 6 A.M. was 15º F. The two mornings before had lows of between 10 º and 12 º F. The daytime temperature yesterday just barely got over the freezing point. It’s during periods like this that my concerns for the plants in the cold frames mount: the protected cold frame in particular contains plants with little tolerance for prolonged freezing.
I uncovered the cold frames this morning, and at about noon I propped them open a bit so they would not overheat. Cold as it was on the outside, the plants in the protected frame show no sign of cold damage. This year there are some new Chilean Tropaeolum growing in this frame (they were there last winter, but they did not produce above ground growth – that’s typical for these plants when newly planted). Tropaeolum azureum is the one I’m really fidgeting over: I’ve never seen this plant in bloom, although I’ve known about it for decades. And now there is the possibility that it will be blooming here in a few months! I'm apologizing now for the obnoxious person I'll be for a while if it really happens.
Posted by McWort at 12:46 PM No comments: