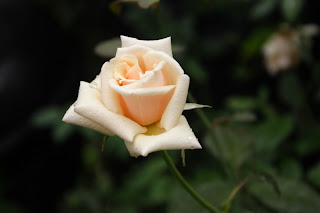 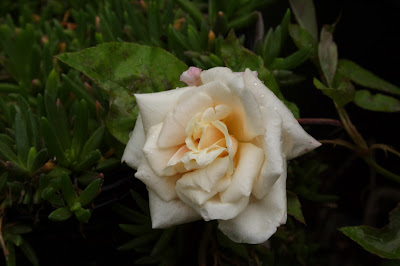 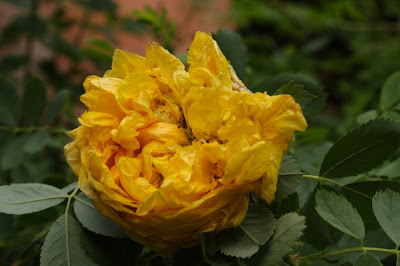 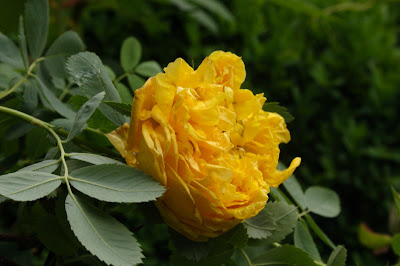 I’ve been waiting to make this entry for years, and now that the time has come, I’ll have to temper my enthusiasm with a bit of disappointment. The rose shown in the images above is Rosa hemisphaerica. The very few of you who have grown this rose probably can guess the source of that disappointment: the garden performance of this rose has not changed much in the four hundred years since it was introduced to European gardens.

Back in the late 1970s I imported two grafted plants of this rose from Hilliers in England. Although those plants survived long enough to bloom, it was apparent from the beginning that it would be an uphill effort to keep them going. They made only halting, skimpy growth and they lost most of their foliage to black spot during the summer. One survived and built itself up enough to eventually bloom, but I eventually lost both plants. I still have good Kodachrome transparencies of the flowers produced by that plant.
If there had been an easy way to do so, I would have replaced those plants. But I could not find a domestic source, and I was not up to the hassles of importing again.
Now fast forward about thirty years. While idly doing internet searches one day in 2002, I hit on a domestic source for Rosa hemisphaerica: Greenmantle Nursery in Garberville, California.  But there was a catch: I would have to make a down payment and then wait for the rose to be propagated. I jumped at the chance, in particular because this would be a plant on its own roots. Marissa Fishman at Greenmantle must have the magic touch: plants in commerce in the past were invariably grafted as far as I know. I assumed I would get my rose in a year or two.
At this point add another eight years to the quest: it was not until April of 2010  that my rose arrived in the mail. Nor was it a particularly prepossessing example: it was healthy but there was not much to it. I planted it in a large ornamental tub rather than in the ground. It did not bloom that first year (I didn’t expect it to), but it did grow well- in that first season here that little plant put on more growth than those plants I had decades ago did the entire time they survived here.
This week, it’s finally blooming, and most people on looking at the images above will probably be wondering why in the world I ever bothered to acquire this rose. The plant produced over a dozen flower buds this year; every one has been so densely packed with petals that the flower has split and the resulting blossom is more or less malformed. This rose has an old reputation for producing problem flowers: more often than not, the flowers ball (fail to expand normally) rather than open properly. So that is the source of my disappointment. But when it performs well and produces good flowers, you'll be very glad indeed that you have it.  I don’t have a perfect bloom to show you this year, but if it continues to thrive here there might be one in the future.
How old is this rose? No one knows; Europeans became aware of  double, yellow-flowered roses growing in the gardens of the Middle East in the late sixteenth century. Those roses were  almost certainly this rose, although the similar rose which became known as ‘Persian Yellow’ when it was introduced in the early nineteenth century also might have existed that long ago and been seen by those early European observers. The rose under discussion here, Rosa hemisphaerica, seems to have been introduced to eastern European gardens in the very early seventeenth century. It was known to Clusius at the very beginning of the century (1601): although there is no indication that he saw a living plant, he related  a description by a Viennese noble woman of a display of paper cutouts of flowers which included double yellow roses (…inter eas erant et flavae rosae plenae…)
Here is the account from the Historia of Clusius; click on the image to enlarge it:

Parkinson,  in his Paradisi in Sole Paradisus Terrestris  (1629), and the Johnson edition of Gerard (1633) both discuss it. In their time it was a very rare plant, a sort of trophy plant likely to be seen only in the gardens of the few.
Here is Parkinson's text; click on the image to enlarge it. Anyone who has grown this rose will find Parkinson's comments familiar. 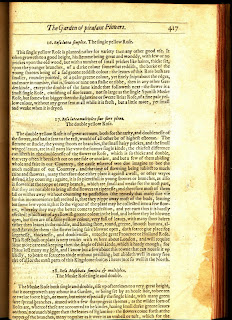 This is the double flowered yellow rose seen in the still life paintings of the seventeenth and eighteenth centuries. It can be seen, for instance, in this piece dated c. 1720 by van Huysum from the collection of the National Gallery:
http://www.nga.gov/fcgi-bin/timage_f?object=56255&image=13916&c=
This rose played no part in the development of modern yellow-flowered garden roses. In fact, until the end of the nineteenth century there were no hybrid roses of garden origin with strong yellow flowers. Throughout the nineteenth century there were yellow-flowered tea roses, but those roses had a pale yellow color which generally quickly faded in bright light. I’ll save the story of the development of the modern hybrid yellow-flowered roses for another post.
Later this week I’ll post an image of an early nineteenth century tea rose with some yellow in its coloration to give you an idea of the yellow seen in tea roses.
Posted by McWort at 10:01 PM 1 comment: 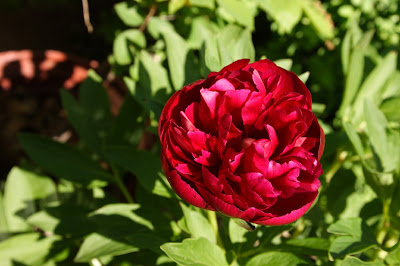 The image above shows the usual garden form of Paeonia officinalis known as 'Rubra Plena'. I purchased the pot-grown plant about two weeks ago; the flower is a bit smaller and less full than those seen on well grown large plants.

Until the end of the eighteenth century, this was the common garden peony in European and American gardens. The introduction of Paeonia lactiflora to Europe at the end of the eighteenth century, and the rapid development of seed grown cultivars of that species, soon displaced Paeonia officinalis, and today Paeonia officinalis is no longer the common garden peony.

American books sometimes call it the Memorial Day peony, but here in zone 7 Maryland it blooms long before that. In most areas it is said to bloom about two weeks before the start of the Paeonia lactiflora season. The scent of peonies of the lactiflora group varies, but many have very agreeable scents, some of them distinctly rose-like. The scent of Paeonia officinalis on the other hand is usually described disparagingly as soap-like.
Posted by McWort at 8:25 AM No comments: