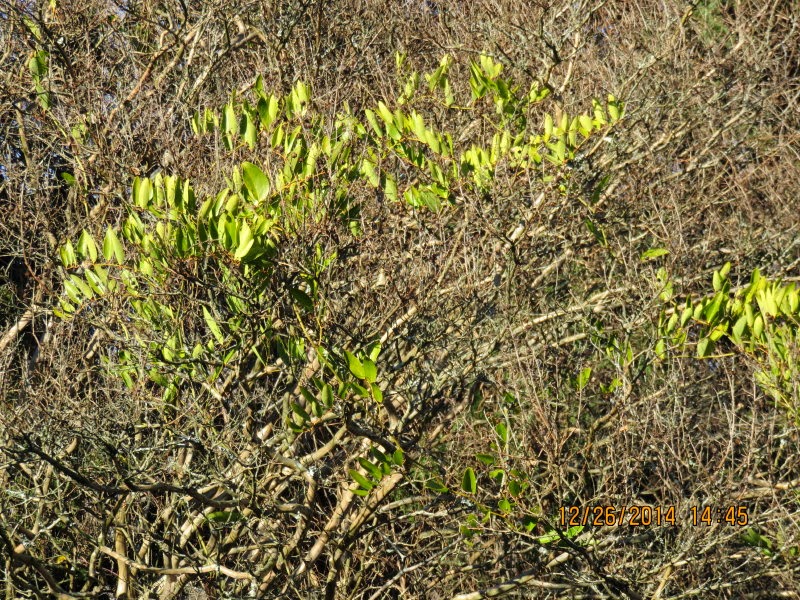 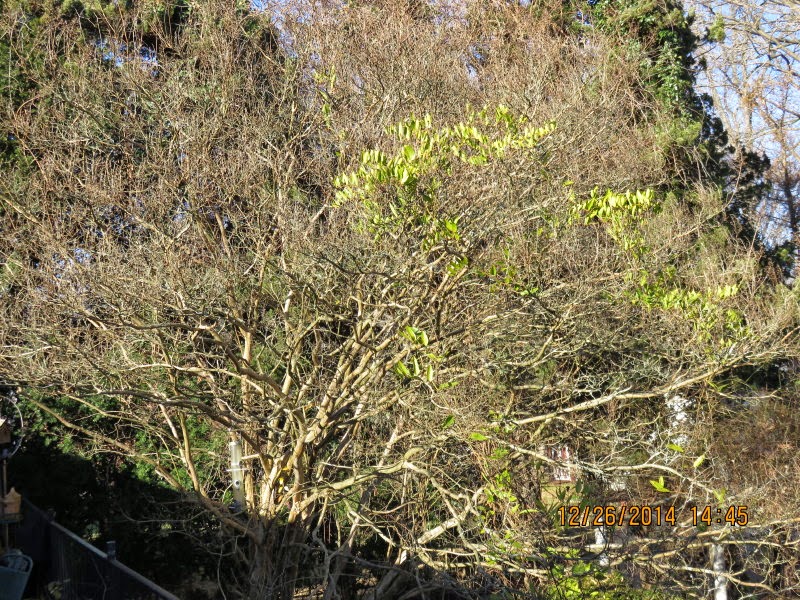 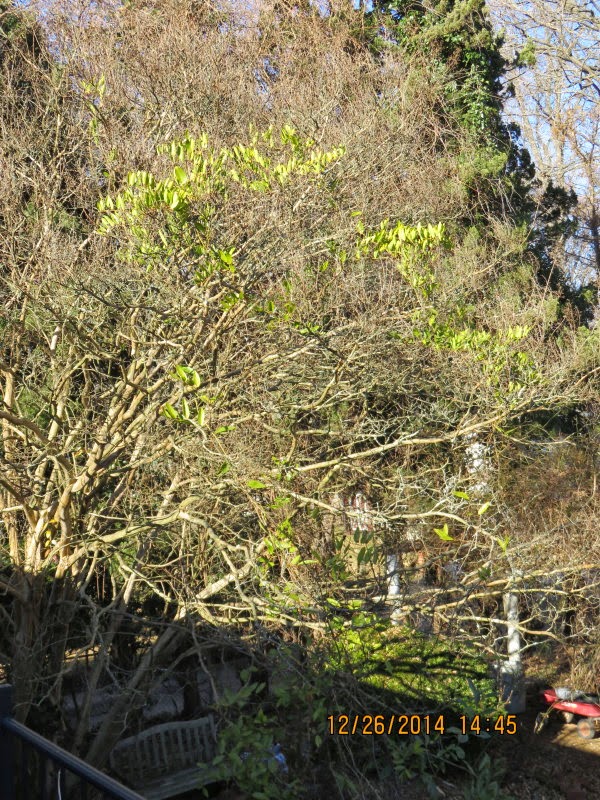 Of all of my accomplishments as a gardener, this is one of which I am most proud. And it took a lot of patience to get even this far: I collected the seed in either 1991 at Virginia Beach or in 1994 at Zuni, Virginia; Wayne and I used to take occasional birding trips to those areas back then. Smilax are very slow from seed: not only does the seed sometimes take years to germinate, but once germinated the resulting seedlings can be very slow growing. The plant in the photos above took years before it began to put on any size at all, but now it annually produces multiple ten to fifteen foot canes.

So far it has not ever shown winter damage, and it now blooms annually. In fact, it set seed last year  and the resulting seeds survived the winter. I collected some of these early this year, and one has already germinated and put up a sprout.

Posted by McWort at 3:15 PM No comments: 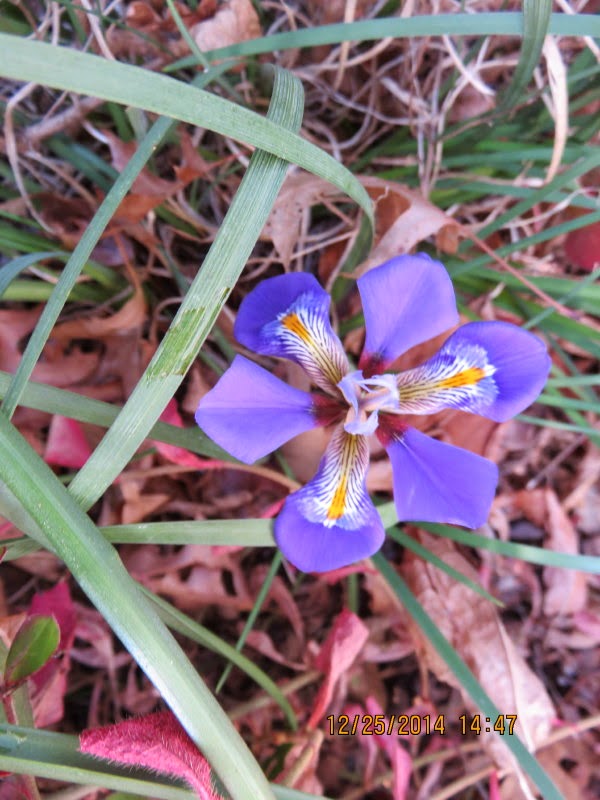 Here's a nice Christmas Day surprise from the garden: Iris cretensis. This is only the second time this species has bloomed here, but I don't expect it to be a problem plant at all. Like its larger relatives, it can take its time becoming established in the garden. Here it grows in a cold frame.  Numerous published reports suggest that it does not require that protection to survive, but the cold frame does protect the flowers.
It's bigger relative Iris unguicularis is also in bloom today - it has produced a cluster of four or five flowers. It's hard to believe such big colorful blooms come from the garden at this time of year - but that's what a well managed cold frame can do.

Posted by McWort at 7:40 PM No comments: 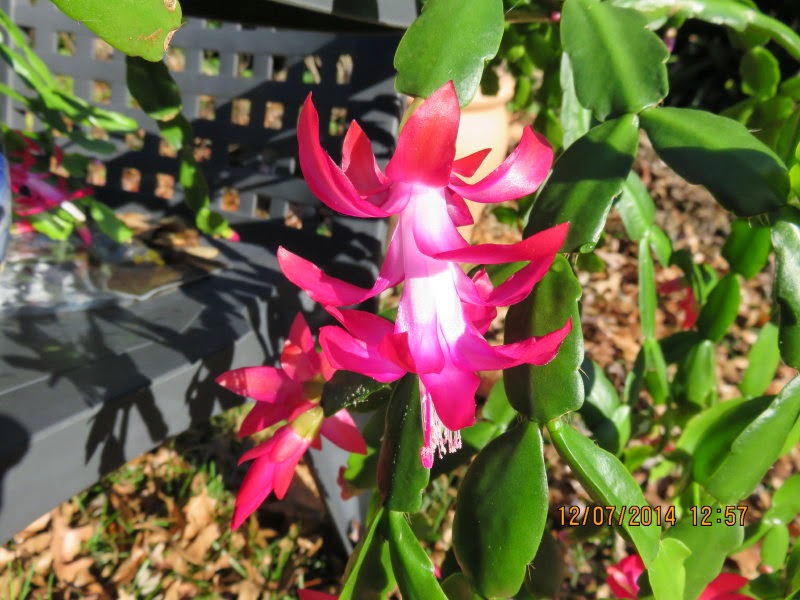 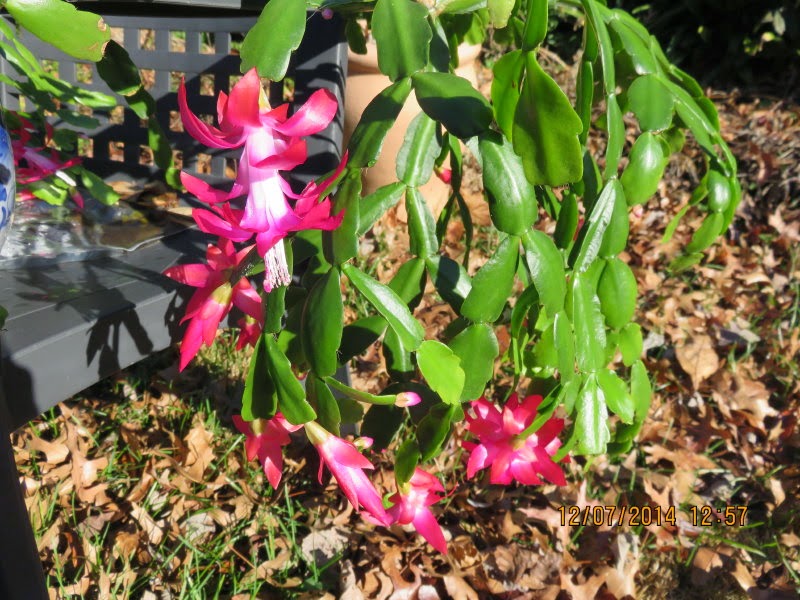 I'm pretty sure this is the plant I knew as a youngster as Christmas cactus. The hanging red flowers and the rounded edges of the leaf-like stems are characteristics I remember. Years later, when I began to collect and buy plants, this plant seemed to have disappeared from commerce: it was replaced by related types with pointed stem edges.

I'm pretty sure it was one of the plants which grew on Mrs  Koch's (she pronounced it "cook") front porch plant shelves. Have I mentioned Mrs. Koch in these posts yet? The Kochs lived two houses away on our street,  Eton Road. When I look at old garden magazines from the mid 1950s and see those "grow orchids on your windowsill" advertisements, I think of her. She had a tangle of epiphytic orchids around her kitchen window: I think she had more faith in their ability to thrive than I did. On her front porch were wooden shelves with a collection of house plants, a collection very much of the times: wax plant (Hoya carnosa), crown of thorns (Euphorbia milii), star fish flower (Stapelia), some begonias, spider plant (Chlorophytum), strawberry begonia (Saxifraga stolonifera), African violets and others, among them the Christmas cactus.

Last August Wayne and I were visiting one of his cousins who lives in the Virginia countryside. How country is country? Country enough to have bears and rattlesnakes wander through occasionally. His cousin had two huge Christmas cactus plants, and when I expressed admiration for them, she didn't miss a beat and invited me to take one home with me. The plant forms an oval about eighteen inches by about thirty six inches: huge in comparison to the ones I knew as a kid. Somewhere in one of my early twentieth century garden books there is a photo of a big Christmas cactus in a pot placed on a narrow round table in what seems to be a bay window.The cactus just about fills the space.

I've never forgotten that photo. Now I've got a cactus of handsome dimensions: should I start to wish for a bay window?

I took good care of it for the rest of the summer, and now I'm getting my reward: it's loaded with buds and blooms.

These plants ( there are many cultivated forms now) are hybrids of plants which grow wild in Brazil. The first hybrids were made in the mid-nineteenth century (the wikipedia entry cites 1852).  If this plant were the original clone (there is no way of knowing now) it could be called Schlumbergera × buckleyi ‘Buckley’, or in more modern horticultural  taxonomy, Schlumbergera Buckleyi Group. It was also known as Zygocactus,  a name which appeared in some of the garden books I read as a child.

This term "Group" deserves some explanation. It has no taxonomic status. There is no implication that the members of a Group are in fact related. The term Group is used by horticulturists when they are dealing with a group (lower case g, in the sense of aggregation) of plants which appear to be similar or identical but about which doubts with regard to their relationship exist.

Here's something interesting, especially given its provenance: some pieces which animals broke off the main plant were overlooked when the main plant was brought inside in anticipation of the first hard frost. Early the next morning, the temperature dropped below freezing for several hours. I noticed one of these detached pieces out on the deck and went out to take a look. It was frozen hard. It was brought in and allowed to defrost. And when it did thaw, it was fine. There was no sign of freeze damage and the buds later continued to develop normally. Note: after writing the above, I went back and read the rest of the wikipedia entry for Schlumbergera. It contains a description of the conditions under which these plants grow in the wild (the Atlantic coast of Brazil, near Rio), conditions which are characterized by occasional overnight drops below freezing in the nearby mountains!

The blooms shown above are among the first ones to open this season. There are plenty of buds left, some of them just beginning to poke out of the ends of the branches. So I'm pretty sure that this Christmas cactus will, in fact, be blooming at Christmas.

Posted by McWort at 1:41 PM No comments: