Wayne and I visited our friends Hilda and Charlie last week, and Hilda sent me home with a handful of seeds of Clerodendron trichotomum. This is one of those plants which is not as common in gardens as its several merits might suggest it would be. In our climate it's a low shrub. The white flowers are deliciously fragrant and are followed by bright blue fruits backed by the red calyx: as a result, it has a long season of interest. The foliage has the usual disagreeable scent of the family, but that scent is not noticeable until the foliage is rubbed or crushed.
Look carefully and you can make out a bit of the red of the now dried calyces and maybe even a bit of the now dark blue of the fruit.
Posted by McWort at 9:14 PM No comments: 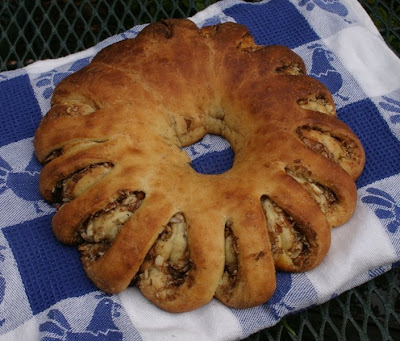 The good baking weather continues, and this week there was this almond crown to enjoy. The filling was based on ground cardamon, almonds and orange zest - a nice, old-fashioned suite of flavors. This one disappeared very quickly!
Posted by McWort at 9:10 PM 2 comments: 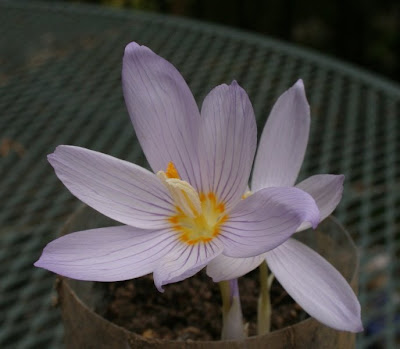 The crocus in the image above is Crocus kotschyanus, the crocus known to generations of gardeners as Crocus zonatus. I spotted this years ago in the lawn of a neighbor of a friend. I could see from a distance that it was Crocus kotschyanus, but I could also see that it was different from the usual forms I grow. When I got up close I noticed that the petals were pointed - acuminate in botanical terminology. This is not typical for this species, although it is for Crocus vallicola, a species in which the points are much drawn out. Crocus kotschyanus and Crocus vallicola share several characteristics, and their ranges overlap: is my plant from a hybrid population?

It was several years more before I was able to dig some corms for the garden, but it is now growing here well.
Posted by McWort at 8:41 PM No comments: 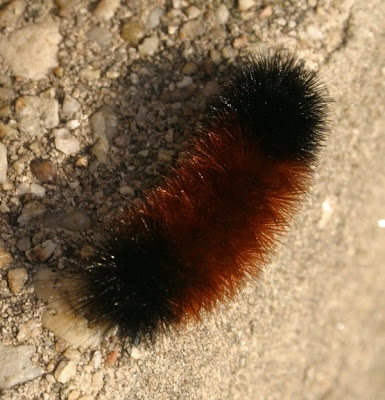 What does the woolly bear say? I don’t know, but here is its picture and maybe you can figure it out for yourself. I found this one the other day while walking Biscuit. Now that it has had its picture taken, I’ll release it in the garden.
Posted by McWort at 4:39 PM No comments: 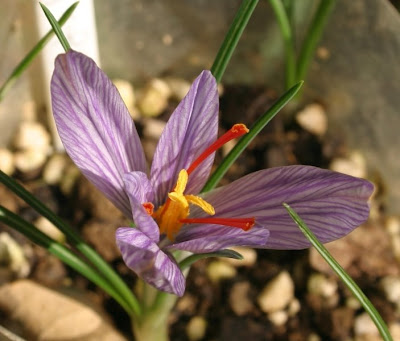 This crocus was received in the summer of 2005 but is blooming for the first time this year. The members of the saffron group of crocuses appeal to me greatly. Crocus oreocreticus has a fragrance which suggests the typical saffron crocus fragrance with a strong overlying note of hyacinth. This and another member of the saffron group, Crocus thomasii, are worth growing for their fragrance.
One of the reasons this plant took so long to bloom might be that it grows in a pot in the cold frame. I grow the plants in the frame in a very lean medium and do not water them much. As a result, many of them give little increase and simply maintain themselves from year to year. I’m still learning how to manage these plants: this year Crocus oreocreticus will probably be planted out into a bed in the open.
Posted by McWort at 4:33 PM No comments: 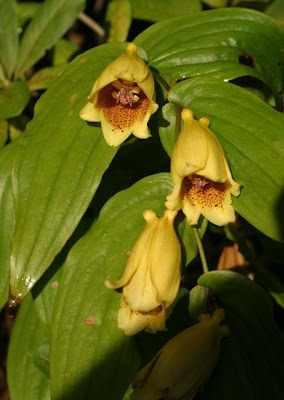 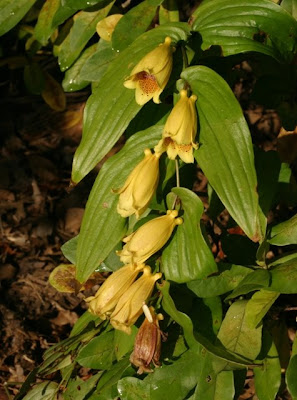 The genus Tricyrtis provides a number of interesting late summer-, early fall-blooming herbaceous perennials with, as a rule, upward-facing, star-shaped spotted flowers. As with so many plants touted for shade tolerance, they actually do even better with plenty of sun. As a group they are called toad lilies. The one shown here, Tricyrtis macrantha, is so different from the others that you might not realize what it is the first time you see it. The flowers remind me of those of some fritillaries or of those of Kirengeshoma palmata. If you tilt them up a bit, you will be able to see the profuse red spots on the inside - again, much in the style of some fritillaries. Not only is it beautiful and unusual, it is also easily grown.
I had hoped that this would bloom with some of the autumnal gentians, but this year at least it finished before the gentians started.
Posted by McWort at 3:04 PM 1 comment: 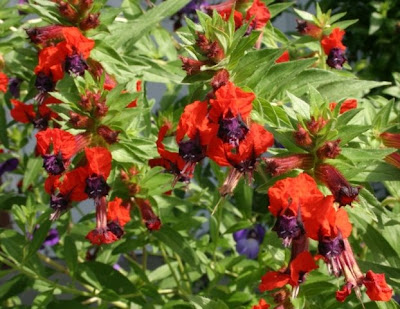 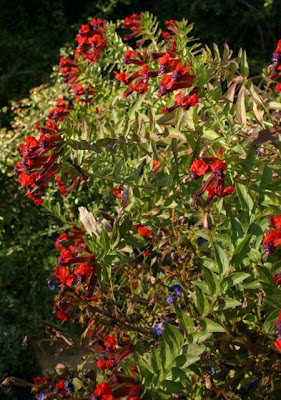 I've purchased what appears to be this same plant under several names over the years; the name I'm using here is the name which came with the most recent acquisition. This plant is sometimes called bat flower because the two large petals suggest the ears of some bats. Cuphea belongs to the Lythraceae and is thus related to crepe myrtle and Lythrum. There is a local native species, too; it's not of much decorative value.
This year 'Fireworks' gave better results than any other sorts tried in the past. It grows in a tall, narrow terra cotta pot on the front steps; it gets plenty of sun there. It thrives in heat and humidity. It's particularly beautiful in the late afternoon sun - that's when these images were taken.

Posted by McWort at 2:42 PM No comments: 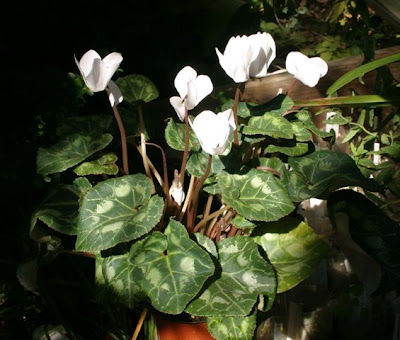 Hybridists have sent the wild Cyclamen persicum on a wild ride over the centuries. The wild plant, the largest of the wild cyclamens, has been bred to be even larger, and in the process the fragrance of the wild ancestor has been largely lost. The result is the so-called florist's cyclamen, a staple of the winter window-sill garden. These big plants are good for providing lots of color for months; but the typical American home is too warm for them, and thus that potential is rarely reached. And although the wild forms grow in areas which experience freezing weather, these big plants are not for the open garden in this area.

There are also dwarf forms of the florist's cyclamen, and these often have good fragrance. That same day I purchased the plant of azalea 'Autumn Belle' I spotted a tray of florist's cyclamens. I was initially drawn by the color, but as I got over the plants a very pleasant fragrance became apparent. I picked up a red-flowered plant, gave it a sniff, and quickly put it down - nothing nice there! A pink-flowered plant gave the same result. And then I tried a white-flowered plant: that's where the great fragrance was coming from. This one came home with me: that's it in the image above.

It's in the cold frame now: its chances are better there than inside the house. Will it survive the winter in the cold frame? We'll see. I hope it does because it's loaded with flower buds, enough for it to carry on for weeks and weeks it would seem. And there is a particular pleasure to be had in opening the cold frame and getting a rush of sweet fragrance.
Posted by McWort at 11:48 AM No comments: 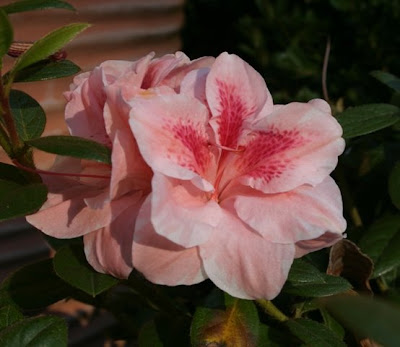 A trip to one of the local big box stores recently resulted in two impulse purchases which promise to make the next few weeks even more enjoyable. Here's the first of them, one of the new and much advertised Encore azaleas. These are azaleas bred to bloom off and on throughout the season. Their blooming schedule is probably like that of the old Hybrid Perpetual roses: a big splash in the spring, bloom off and on throughout the summer, then another splash in the autumn. Or is it? Time will tell.

These Encore azaleas are available in a narrow range of colors in the magenta-blue red range; there are also white-flowered sorts. Are any of them fragrant? Fragrance is not mentioned in the advertising.

The one I bought is 'Autumn Belle', a sort of warm salmon pink with red-pink spots. At the edges of the petals are white areas, which look as if they had been splashed and streaked on. The resulting pattern is striking and reminds me of the patterns caused by color breaking virus in some plants, and it also reminds me of the color patterns seen in some of the azaleas grown for winter bloom indoors as houseplants.

One use for this handsome plant immediately comes to mind: pair it with the autumn blooming camellias. Camellias and azaleas in the garden during October and November: that's going out in style!
Posted by McWort at 11:12 AM No comments: