How little some things have changed... 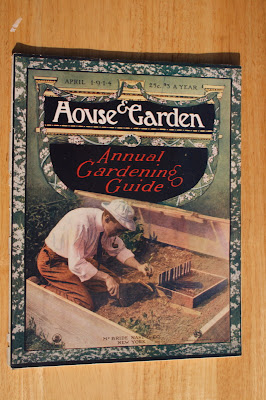 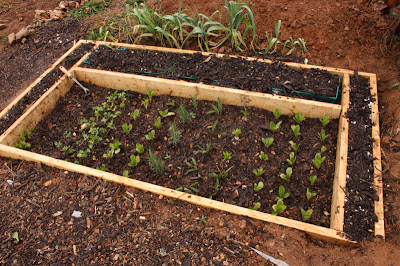 The top image above is the cover page of the magazine Home & Garden from April of 1914. That's two years and several months short of a century ago. Was the original for that photograph an autochrome? And look at the width and thickness of the lumber used for the framing of the cold frame:  I've never seen anything that big for sale. The hat and the pipe are very much of the time, and at first glance I thought "What is Sherlock looking for  down there in the dirt?" I took an immediate liking to this cover, and over the decades I've owned it have taken it out now and them to keep up my hopes that one day I might have something like it.

Now fast forward nearly a century. The lower image shows one of my cold frames at my community garden plots. It's planted with lettuces, sage cuttings, rosemary cuttings, lamb's lettuce, flat leaf parsley, chervil and some odds and ends. No Sherlock because he was the one taking the picture.  I expect the plants in the cold frame to be fine until about the turn of the year; after that, we'll see.
Posted by McWort at 11:40 AM No comments: 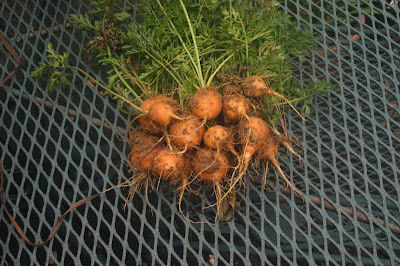 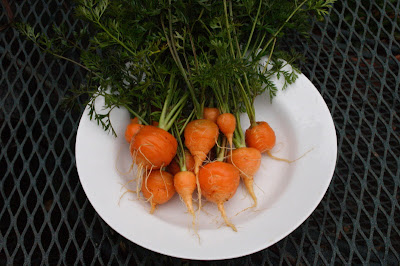 ﻿
No, those are not orange radishes. The little orange globes you see above are the old carrot variety 'Parisian', sometimes called 'Parisian Market'. In addition to offering an unusual shape for carrots, they have the advantage, because of their round shape, of growing well in rough, stony soil (e.g. the soil in my new community garden plots). To attain their sleek, long form, typical carrots require deeply prepared soil free of obstructions such as stones. To harvest 'Parisian' no digging is necessary: the carrots form at the surface or just under it and pull easily from the ground.

Above you see them as freshly dug and then after a stop with the fluffers for their blog debut.
Posted by McWort at 2:22 PM No comments:

I first became aware of Frank Kameny in the late 1950s when his arrest on sodomy charges made the news. I was about 14 at that time, and although I was mortified by the sodomy charges aspect of the events, I nevertheless knew very well who I was and that it was my team which was taking a very public bashing.  It was not long before I heard about the  Mattachine Society, although I had no idea how to become a member.


Now fast forward about twenty years. In the mid 1970s I joined the DC Gay Activists Alliance and finally met this man who had been on the margins of my consciousness for so long. That first meeting was not entirely propitious: had I been looking for a hero, I probably would have kept looking. Frank was hardly the prepossessing sort; in fact, my initial cursory impression was that he was a Marabou stork of a man. I wasn’t the only one who felt that way: there were actually serious discussions at the GAA meetings to arrange some sort of funding to pay for Frank to have dental work. ”The movement” back then was preoccupied with public images, and while no one seriously doubted his ability to speak eloquently and effectively on behalf of our cause, there were frequent backstage murmurs about the appearance of the messenger.
It didn’t take me long to realize that my ornithology was all wrong: the man was not a stork, he was an eagle. Those monthly GAA meetings could be tedious and boring, yet on nights when Frank was in good form, they provided some lively theatrics. No sooner had some injudicious newbie had the temerity to voice some poorly thought-out or logically flawed proposal than Frank would launch a keenly articulated rebuttal.   If the idea being offered was one he found to be repugnant, then the rhetorical fireworks really went off in an almost ferocious explosion. But the wonder of these exchanges was that as I knew him, he never lowered himself to ad hominem attacks: he stayed focused on the issues, not the person. And when it became apparent to him that his adversary was acting out of truculence, he would abruptly end the discussion and announce – and I can still hear him saying this - “In that case, then we agree to disagree.” It wasn’t unusual to hear him later chatting convivially with the erstwhile target of his lashings.
One of the things I sometimes wondered about when I first began to attend GAA meetings was how this man, who alone for about two decades had been the most conspicuous face in the gay rights movement, would work with the younger upstarts who now surrounded him. There was a pervasive respect for Frank back then, an always present awareness of his unique status in our community, yet those attitudes did not necessarily translate into tranquil exchanges in a changing world where the young Turks were sometimes pulling for new ideas and different directions. Yet it quickly became apparent to me that he had another good quality: for all of his seeming apartness, he was a skillful team player.
Many times during a lively debate one could look over and see Frank sitting there, taking it all in. There were times when the look on his face suggested bemusement; I like to think that that look was at least partly motivated by a sort of avuncular pride: after all, he more than anyone had made it happen.


Years after I left GAA I read the diaries of Virginia Woolf; there is a passage there in which Woolf describes the fascination she experienced as she watched Jewesses (her word) listening to Classical music.  No sooner had I read those words than I remembered the fascination I felt in watching Frank as he, with almost palpable intensity of concentration, followed the development of a proposal being broached by another GAA member.
The leadership of GAA in those days kept to a surprisingly high-minded standard of deportment during meetings. Those attempting a sally into the trivial or frivolous risked a public rebuke. Smarts and accomplishment won you respect. It took me a while to win Frank’s respect, but when the time came I relished it. As the one man communications committee person I had written a letter on behalf of GAA to the Washington Post in which I pointed out some shortcomings in an article which the Post had published. We desperately wanted recognition back in those days, and no one expected the Post to deign to reply. But reply they did, and surprising as that was, there was something else  which pushed it over the top: the Post’s response was signed by none other than Ben Bradlee himself. Frank gave me a look that day I’ll never forget.
Years after I left GAA I ran into him around town a few times. I remember one meeting where, after a bit of prompting, he seemed to remember me. I vaguely remember another meeting much later when even generous prompting didn’t seem to elicit a response. But both times he was delighted to be recognized and responded with a profuse display of the old fashioned, almost courtly politesse with which he always addressed me (and I suppose everyone else he did not know well).
I’ve never met anyone else with such an utterly imperturbable sense of integrity; he could be persuaded by a well-articulated argument, but his core beliefs seemed to be adamantine and immutable. Once fixed on a goal, he was relentless. These qualities sometimes impelled him on to conclusions which baffled or even offended his supporters, conclusions which were definitely not ready for prime time. Yet this candor rarely left any doubt about his position on the issues.
Frank may have forgotten me, but I doubt that I will ever forget Frank. And I am glad to have this opportunity to publicly express my gratitude for all he has done for us.

Posted by McWort at 9:19 PM No comments:

A view of the back garden 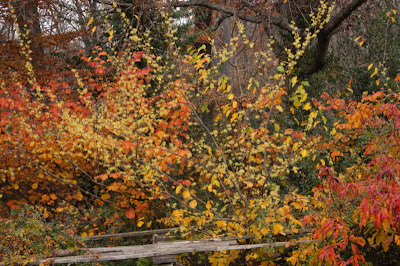 Here’s a view of what’s happening in the back garden right now. The image is out of focus ( I tried several times but could not get the Hamamelis flowers in sharp focus), but in a sense that improves the overall effect. The red foliage on the left is that of Hamamelis ‘Feuerzauber’, the yellow flowers in the center those of the plant onto which ‘Feuerzauber’ is grafted, the red foliage on the right is that of Franklinia alatamaha.
Posted by McWort at 10:12 PM No comments: 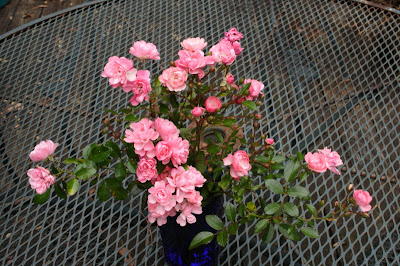 This little charmer is a 1930s anticipation of the modern ‘Knock Out’ roses. And like that more modern group it has almost all of the qualities of the best roses. It shares the same failing: lack of fragrance. But  it finally dawned on me that it was time to get off my high horse when it comes to fragrance in roses. Yes, I definitely prefer my roses to be fragrant. But does it make sense to ignore a rose which scores in the highest ways in other qualities simply because it lacks fragrance? It does not to me, and so I’ve made my peace with the Knock Outs and am ready to really appreciate Bentall’s little 1932 beauty.


Do you have doubts? If so, I suggest you seek out established plantings of these roses in November. I wish I had the room for an allée of autumn camellias and Knock Out roses in harmonious colors; maybe some of the Encore azaleas would work in this grouping, too. The whole planting would be fronted by ‘The Fairy’. These are plants which have the ability to bring a spring-like freshness to the garden at a time when it is otherwise winding down for the year.
‘The Fairy’ is conventionally placed among the so-called Polyantha roses; but unlike most Polyantha roses ‘The Fairy’ has Rosa wichurana (formerly R. wichuraiana) in its background. It makes just as much sense to think of it as a dwarf shrub rose.
I have not grown this rose yet myself, so the image you see above is an exception to my usual rule to include only plants grown in my own garden. Wayne and I visited our Northern Neck friends Charles and Hilda last weekend, and as we were about to leave Hilda took me over to “The Fairy’ and cut a nice bouquet. The cool weather was especially kind to the color of the flowers, and the foliage of the plant was immaculate. It was hard to believe that this rose had gone through the summer: everything about it was so fresh, clean and brimming with vigor. And the color warmed up beautifully under incandescent light.
Posted by McWort at 9:47 PM No comments:

Yikes! I have not made a blog posting in almost a month.What's going on?

The answer is that my other garden, my community garden plot, is absorbing every bit of time I give it.- and then begging for more.

I binged on bulbs recently, and as soon as I finish the tilling at the plot, I'll be planting bulbs - probably right up to the time the ground freezes.

I also built and installed two simple cold frames at the plot. New wood chip mulch was recently delivered to the plot site, and I've been busy moving it to my plot where I till it into the ground.

Newly purchased nursery stock has been lined out at the plot where it will remain until I'm ready for it back here at the home garden. There are some new hedges in the home garden's future (at least if my back holds out).

There are days when I come home from the garden plot on the verge of exhaustion; but it makes for wonderful dreams!
Posted by McWort at 9:38 PM No comments: