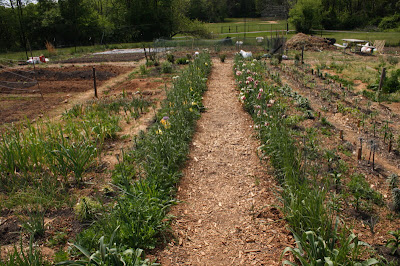 Here's a photo of one of my community garden plots; this was taken on April 17 of this year. Green is slowly covering the site. Flowering along the central path are parrot tulips and various ornamental onions. The onions are in general shorter than expected - this is no doubt due to the drought we are experiencing.

Compare this photo to the photo posted March 29: the lilies on the right are filling in nicely, too. On the left of the image are rows of multiplier onions, shallots and garlics.
Posted by McWort at 5:21 PM No comments:

The importance of matching the tool to the job... 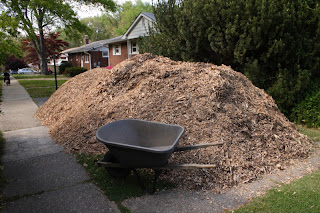 One of the large white oaks was taken down today. Most of it was run through a chipper. When the truck arrived this morning it already had a substantial load of chips from an earlier job, and all were eventually dumped in the driveway and on the front lawn. Anyone care to estimate how long it's going to take me to move all of this?

When I looked at my puny wheelbarrow beside that huge double humped mound of mulch, my sense of humor provided the title for this post.
Posted by McWort at 4:08 PM No comments: 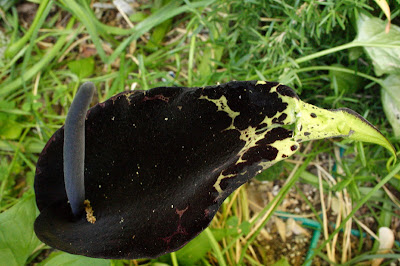 The arums are, as I know them, summer dormant winter growing plants notable for lush foliage and foul-smelling "flowers".  Most of the members of this genus produce foliage in the autumn; in our climate this foliage sometimes persists through the winter but is more often than not destroyed. I tried this species years ago in the open garden, and it lasted about three years before it finally gave up. Four years ago a tiny offset appeared at one of the local plant exchanges and I decided to give it a try again. This time it was planted in the protected cold frame. It's blooming this year for the first time.

Arum dioscoridis is notable for the color pattern of the interior of its spathe. Something nicked this one just as the spathe was unfurling, and so the spathe is not quite as striking as it might have been. But you can easily get the idea from what's there.

This one produces a pervasive, reeking, stealth stench: I could smell it from inside the house (there was an open window near the plant). 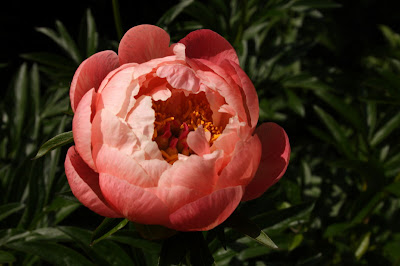 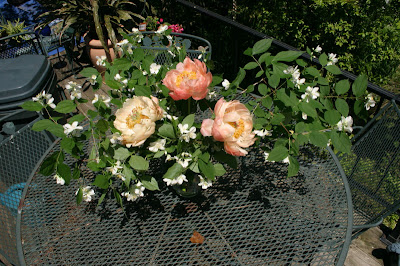 This beautiful, robust peony has done well here. It's valuable for its early bloom and its ease of culture. It has every good quality expected in a peony except one, and that one is a significant failing: it stinks. It reeks of stale fish. To be sure, one has to bring the flower right up to the nose to detect this, but it's definitely there.

The color changes as the bloom ages. By the time the flowers are mature they are sometimes a sort of

café au lait  tone or even pale yellow. In the lower image you can see this range of color.
Posted by McWort at 9:56 AM No comments: 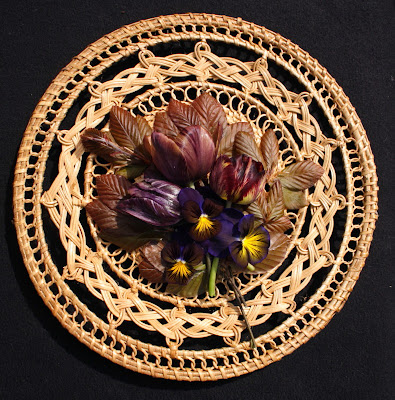 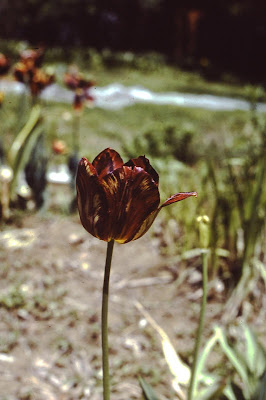 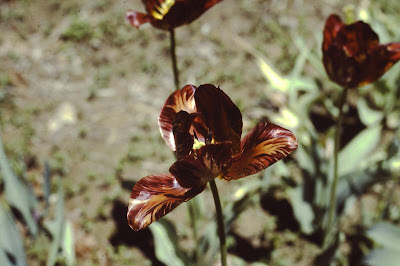 The combination of brown, broken tulips with the young leaves of the copper beech produces one of my favorite color associations. The tulips you see here are 'Absalon' (this time with very little color breaking so that it is essentially a brown tulip), 'Lord Stanley' (boldly streaked red and yellow)  and 'Insulinde' (slate colored). A few pansies in a similar color range complete the group.

The color of 'Absalon' matches the color of the copper beech leaves almost exactly. The appearance of this tulip varies much from season to season. In the lower pictures, taken in 1981, you see other ones including a boldly broken example. It's not only the color pattern which varies: the shape of the tepals also varies.

Next year I hope to have more tulip flowers with which to work up such a combination, but even these three produce a rich effect all out of proportion to the meager resources used.
Posted by McWort at 4:33 PM No comments: 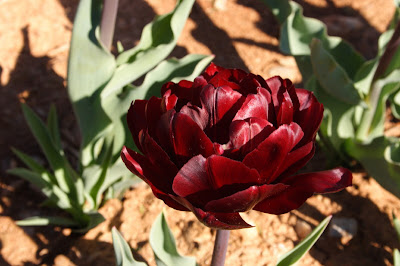 To my tastes tulips do red better than any other flower; and my favorites are those dark ones which show hints of the color of dried blood. Beautiful as they are in full bloom, for me there is something almost unbearably poignant about the color of fallen red tulip tepals as they begin to darken, dry and wither. I've been known to cut some of these and as the tepals fall allow them to lie on the table surface for weeks.  It means, of course, that another tulip season is ending. Any tulip which shows this dark red color is apt to be a favorite here.

Above is 'Uncle Tom', a late double tulip which was introduced about five years before I was born. I've probably known about it most of my gardening life, and it's another one I would not like to be without. When the flowers begin to open the color seems off: it's not the brown-red expected. But as the flower matures it becomes suffused with the rich color for which it is so famous.
Posted by McWort at 9:00 PM No comments: