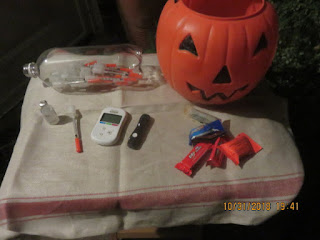 I really didn't do this, but I was so tempted.
Back in July, I was diagnosed with diabetes 2. I was tempted to put this little  horror show by the front door to greet all the little sugar bees.
Posted by McWort at 8:10 PM No comments: 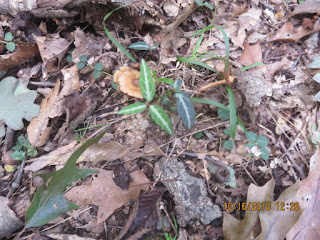 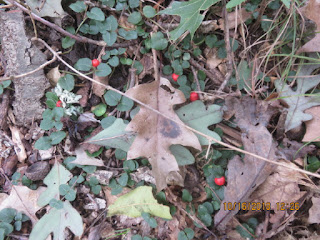 Pinewoods have a distinctive flora, and when I was a kid I lived near a block of remnant pine growth. There I got to know some of the distinctive plants which grew there. When we moved to the present home in 1961, I found myself surrounded by a new flora. Sadly, many of the plants once common here are now rare or gone - I blame the deer and the  wildflower vandals.
But some of the disappearances are due to a different cause, the natural ageing out of a once dominant flora. Within easy walking distance of the house there is a patch of remnant pine growth. I've been visiting this spot for over a half century, if only for the memories it recalls. Only a few of the pines themselves survive, and under them a few of the plants characteristic of pine woods. Here you see two of them: the partridge berry, Mitchella repens and one of the pipsissewas, Chimaphila maculata. The partridge berry seems to be taking the changes in stride; the pipsissewa not so much so. That's not surprising: for success, the partridge berry mostly needs lack of competition from taller plants. The pipsissewa on the other hand evidently lives in association with soil fungi which themselves form relationships with the pines. When the soil fungi go, so too will the pipsissewas.
By then, I'll probably be gone, too.
Posted by McWort at 7:40 PM No comments:

Watch where you step! 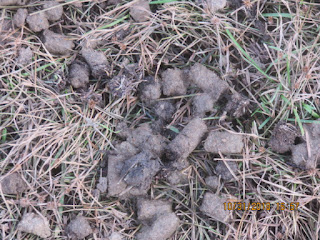 It was probably fifty years ago when I first read Konrad Lorenz's King Solomon's Ring. The image above provoked a memory of one of the stories in the book. It seems that the Lorenz residence included many of the animals curious zoologists tend to accumulate, including graylag geese. The geese had the run of the ground floor of the house, and their deposits littered the floor. Lorenz's grandfather, whose vision was failing, had frequent, unsanitary  encounters with these.
So when I first saw what you see in the image above, it was easy to imagine that a flock of thousands of well-fed geese had recently roosted on those ball fields.
But geese are not to blame. An aerator had recently worked the fields, and the results when wet will be just as messy as what geese leave.
Posted by McWort at 6:46 PM No comments: 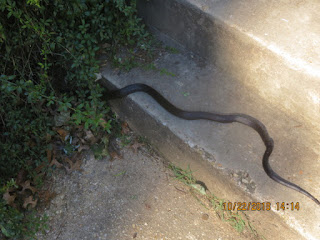 When I stepped out onto the front porch the other day, I saw this draped over the front steps. It's a black rat snake, our largest local snake. But it's probably not just any black rat snake. It's probably "our" black rat snake. And if it is, it has been seen here over and over  since it was a hatchling.  It and"our" garter snakes can be seen in the bushes along the front of the house in April and in October. They bask in the bushes, and I'm pretty sure they hibernate at the house foundation. I've long regarded the presence of snakes as proof of a well managed garden.
Posted by McWort at 6:39 PM No comments: 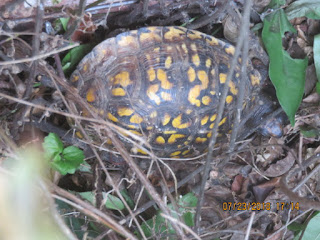 You'll probably have no idea how happy this makes me. It's been years, many years, since I've seen a live box turtle in this neighborhood. I'm glad to also say that it's been years since I've seen a dead one on local roads. If you had asked me recently about box turtles, I would have said that they probably no longer survive here. So I'm very happy today.
This one looks like a female to me. I hope she thinks this is a good place to lay her eggs.
A couple of hours after I took this picture I went back to take another look, but she had already moved on.
This made my day!
Posted by McWort at 8:18 PM No comments:

Passerina cyanea the indigo bunting and the urban ornithoscopist

While absentmindedly staring out the bedroom window the other day, this bit of gorgeous blue caught my eye. It was only about eight feet away, out on the deck eating grass seeds. I walked to the other end of the house to get a better view, and just then I heard the front door opening: Wayne was coming in.  I grabbed him by the arm and motioned for him to keep quiet as I whispered "indigo bunting" and dragged him to a window with a good view. I gave him the camera and he took the video you see here.

Posted by McWort at 2:07 PM No comments:

Vermeer and Van Leeuwenhoek: best buds pranking and pulling a fast one?

Yesterday Wayne and I went down to the National Gallery to see the exhibit VERMEER AND THE MASTERS OF GENRE PAINTING. It was time well and enjoyably spent. Dogs of a brown and white spaniel sort appear in several of the pictures, and we heard someone joking that the several painters all used the same dog, borrowing it one after another. This morning's Washington Post had an article on two breeds of dog now newly recognized by the American Kennel Club: one is the nederlandse kooikerhondje, a brown and white spaniel which looks just like the dogs in the mid-seventeenth century paintings. I was about to write a letter to the Post pointing out that the dogs in the Post picture looked a lot like the dogs in the paintings. When I pointed this out to my friend Jane, she responded that the Post did mention (in the later edition she read) that the dogs sometimes appeared in old paintings: in other words, as she put it, someone beat me to it.
There were also parrots in some of the paintings. The first one I spotted, from a distance, looked like an African Gray Parrot to me. But on closer inspection, it appeared to be green. Is this a case of an originally gray pigment ageing to green?
Earlier today I was looking at pictures of poppies in an on-line seed catalog. That reminded me that there is a Vermeer at the National Gallery which was not included in the exhibit: his Girl with the Red Hat. I did a post about this in 2016; take a look here:
http://mcwort.blogspot.com/2016/06/poppy-in-search-of-girl.html

As I looked at that face this morning, I had a bit of startling insight - or was it delusion? To me that face was familiar. And it was something I saw in the exhibit yesterday which seemed to bring several things together. The exhibit included the famous paintings The Astronomer and The Geographer. There is a tradition that A. Van Leeuwenhoek was the model for the men portrayed in these paintings. Not a lot seems to be known about the connection between Van Leeuwenhoek and Vermeer, but this much is known: the records of their births appear on the same page of the registry in the Delft church where these were recorded. And Van Leeuwenhoek was the executor of Vermeer's will.
Girl with the Red Hat is a bit of a puzzle. The subject of the painting is wearing an outlandish get up: there is no reason to believe that the citizens of Delft went around dressed that way. That pretty much rules out its genesis as a portrait. Nor is it a typical genre piece. The painting seems not to emphasize the quality of the garments so much as it obviously gives the artist the opportunity to display some exquisite brush work. And what is that hat made of? But what really catches the eye is that beautifully rendered face. No female face in the exhibit comes close to this one: it's so natural, so warm and alive, so real. And when I look at that face I see the same face looking out from the painting of The Geographer, the face,  it seems to me,  of a young, comely Van Leeuwenhoek.
Were Vermeer and Van Leeuwenhoek best buds? Are they pranking here and trying to pull off a fast one on us?
You've got until January 21 to get down to the museum and see all three paintings for yourself. The Astronomer and the The Geographer are in the big exhibit,  Girl with the Red Hat is in Gallery 50A. And is this the first time all three have been under the same roof at the same time since they left Vermeer's studio?