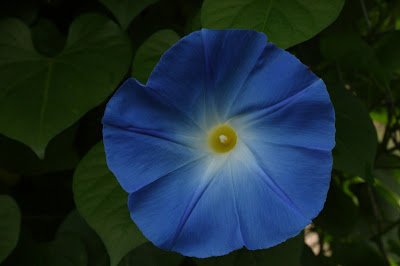 According to the old books, blue flowered Ipomoea tricolor were in cultivation over a century ago,  but those plants were very late blooming. This was sometimes the case with plants little improved over their wild forms. The Cosmos bipinnatus grown in the late nineteenth century were huge, coarse plants, tall and very late blooming. It was not until well into the twentieth century that dwarf, early-blooming forms were developed.


‘Heavenly Blue’ came into commerce as  “Clark’s Early Heavenly Blue Morning Glory”. Anne Roe Robbins, in her 1949  HOW TO GROW ANNUALS points out that it was introduced before there were All American Selections awards – the point being that one would expect the best blue flowered plant we can grow easily in our gardens to have an AAS award.  Her book has been reprinted by Dover; be sure to at least see the original because the Dover reprint contains revised cultivar lists.


On the street where I grew up in Silver Spring, Maryland in the 1950s we had a neighbor whose garage in many years had a glorious swag of this morning glory over the doors of the garage.  I’ll bet garages all over America have been festooned similarly, even to this day. Garages, out buildings, fences, the otherwise bare, sunny façade of a building – all are ideal places for this plant. It pays to give it plenty of room: a sunny surface of several square yards is about right. When you come out in the morning and see a mass the size of a bed sheet of the intensely  blue flowers you won’t regret being generous with space.
Posted by McWort at 2:06 PM 2 comments: 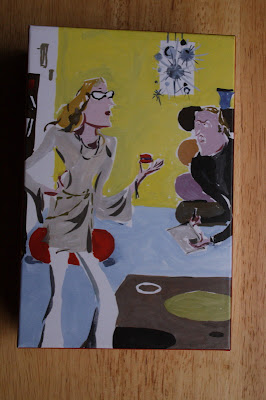 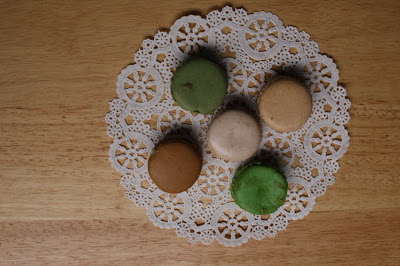 Someone left a box of Pierre Hermé macarons at my door today - someone who knows someone who just flew in from Paris. I’ve been given strict instructions to consume them promptly, while they are still fresh. They came with a sheet identifying the various flavor combinations, but I’m not to peek at that until the tasting is done.  I’m to take notes so we can discuss these later. This will be a very serious discussion: we’ll put the wine tasters to shame with our witty inventiveness in identifying the flavors!


And to think that, if asked, I would have settled for the remains of a baguette of Poilâine bread!
Posted by McWort at 4:21 PM No comments: 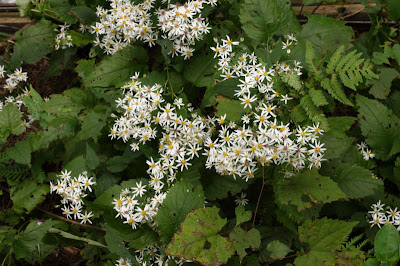 Here and there around the area in local wood verges the white woods aster is blooming freely. Generations of gardeners have known and grown this plant as Aster divaricatus. Recently the old name Eurybia divaricata has been revived. The name Eurybia dates from the early nineteenth century, so it is nothing new.
In her 1909 work COLOUR IN THE FLOWER GARDEN Gertrude Jekyll calls this plant the small wire-stemmed aster and gives two photographs of it. I take that as a measure of her esteem; back in those days, photographs in a book were an expense and a bother. In the garden, Jekyll combined these asters  with the plant she knew as Megasea, the big, cabbage-leaf saxifrage we now call Bergenia. The plants form a great contrast:  the broad, glossy, corrugated leaves of the Bergenia are an intriguing foil for the shiny, black, wiry stems and white stars of the aster .


Jekyll’s account of this plant raises a question for me. Here is her text: “There is a small growing perennial Aster – I will not venture on its specific name, but have seen it figured in an American book of wild flowers as divaricata, and provisionally know it by that name.” The genus name Aster is masculine in gender; the genus name Eurybia is feminine. Did the American wild flower book Jekyll mentions call the plant Eurybia divaricata?
Posted by McWort at 11:03 AM No comments: 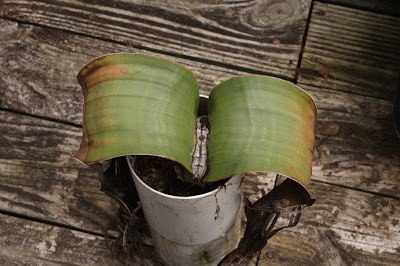 Now fifteen years old, my Welwitschia has not changed much in the last few years. It might come as a surprise for most of you to learn that the care of this plant is little different than that given to most pot plants. Frequent soakings don’t seem to bother it a bit. I’ve made no attempt to duplicate the conditions in its Namibian homeland.
Look carefully at the foliage: the transverse striations about two inches from the center of the plant on each leaf mark more or less the extent of this year’s growth.
When the plant was younger I was very careful not to damage the dead parts of the leaves in any way – I wanted them to get as long as possible. But the dead part of the leaf falls off if it remains wet for long, and last year most of the dead part which had accumulated in all the years I’ve had the plant came off.
Posted by McWort at 9:22 AM 1 comment: 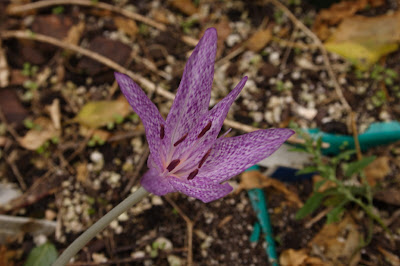 The name Colchicum agrippinum poses a bit of a name problem.There is no evidence that a sexually reproducing population corresponding to this plant exists any where in the world; in other words, it is not a species in the modern sense. On the other hand, more than one such plant seems to exist; and that suggests that the plants given this name do not form a clone. The plant shown above is blooming in the garden now; it came from Jane McGary in 2006. She found it in a Portland, Oregon garden where it had eviently been growing for a long time. It differs from the usual commercial Colchicum agrippinum, at least as I know them, in having much more distinctly checkered flowers and richer color. In fact, it's a fair rival for one of its assumed parents, Colchicum variegatum. Take a look at Colchicum variegatum here:
http://mcwort.blogspot.com/2007/09/glory-of-all-these-kindes.html

These colchciums with checkered patterns are to my tastes the choicest of the bulbs of the sesaon.
Posted by McWort at 6:34 PM No comments:

Sedum and a visitor 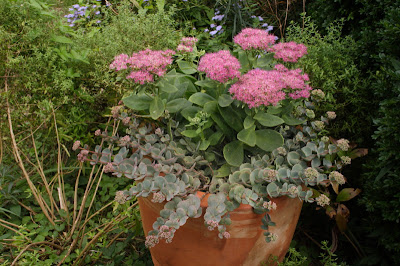 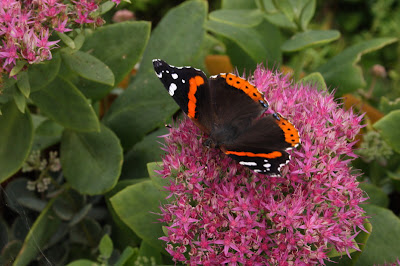 Two handsome sedums can be seen in the upper image above: the upright Sedum spectabile (or maybe it is one of its hybrids) and the flat-growing Sedum sieboldii. They make a nice contrast, don’t they? I think I like sedums in pots better than sedums in the ground. In old books I’ve seen photographs of big ornamental pots at the edges of borders planted with sedums – and very attractive they are, too.
In the lower image you can see a visitor: the red admiral butterfly, Vanessa atalanta. On paper the color combination seen here might seem odd, but in life it’s gorgeous. There is something comical about this butterfly: after landing on the flowers, it slowly rotated counterclockwise when moving to a new blossom rather than moving in a line across the inflorescence.
Sedums are a must-have for butterfly gardens. And when the broccoli-like inflorescence starts to color up, it makes a nice nearly flat platform against which visiting butterflies can be photographed.
Posted by McWort at 1:44 PM No comments:

I’m not a daylily person. I don’t travel in daylily circles, don’t attend daylily shows and don’t know by name any of the modern cultivars. And I can easily explain my indifference to the general run of daylilies: most of them have a squat habit of growth with scapes which lean. For the most part, the daylilies I do like have rigidly upright scapes, although I’ve long made an exception for Hemerocallis minor.


Yet there are typical daylilies with qualities I like, and there have always been daylilies in this garden. And one of these days I hope to have them in numbers.
Decades ago I acquired a copy of Arlow Stout's 1934 book Daylilies. It was there that I first learned of the extremely tall daylily he eventually (in the year I was born, 1943) named Hemerocallis altissima. For years I searched unsuccessfully for a source for this plant. Several imposters came and went, and I eventually began to wonder if the true plant still survived in cultivation. I grew two hybrids of this plant: the cultivars ‘Autumn Minaret’ and ‘Autumn Prince’. Of the two, I like ‘Autumn Prince’ better because to my eyes it has the economy of build which so often characterizes wild plants. ‘Autumn Minaret’ is taller and ganglier with flowers which have a twist or flare which to me says “poorly selected hybrid”.


Two weeks ago I acquired another plant under the name Hemerocallis altissima. And in the meantime I acquired a new perspective of these plants: Hemerocallis altissima is currently considered to be a synonym of H. citrina. These nomenclatural shifts are a reminder to those of us who tend to collect names that we should really be focused more on the plants. Whatever this new plant turns out to be, I expect to have what I’ve wanted all along: a very tall, yellow-flowered, night-blooming daylily.
Posted by McWort at 6:49 PM No comments: 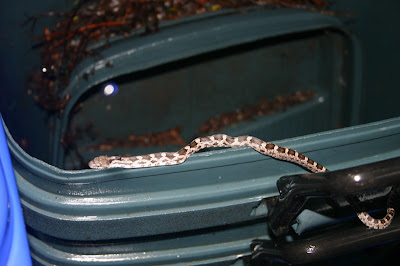 The little one shown above is an example of the young phase of our largest local snake, the black rat snake, Elaphe obsoleta (Pantherophis obsoletus), Adults are, at first glance, pure black; but if examined closely traces of the pattern seen in young examples can generally be seen. This species climbs well, and that, as much as anything, probably accounts for its persistence and abundance in suburban areas.
The catbirds found the snake before I did: they were busily squawking in the nearby shrubbery. The heavy rain we have had for the last week probably brought the snake out into the open.
Posted by McWort at 5:34 PM 3 comments: