The sensory overload in my gardens now is almost overwhelming! The sense of exuberance provided by the abundance of new growth, the colors, the fragrances - it's almost too much. Thousands of rose buds are beginning to open, tall bearded irises are in full bloom. At home, the noisette roses on the south side of the house are providing an avalanche of soft yellow, sweetly fragrant blooms.
I'm taking lots of pictures, sometimes a couple of dozen in a few  minutes. Working that fast is an invitation for mistakes, and a fascinating one occurred the other day.
When I got home and downloaded that day's images, I had a couple of apparent duds. I almost deleted them, but one in particular caught my eye: it's definitely a keeper! That's the one you see above: I've already got an 18" x 24" print out hanging on the living room wall. From a few feet away, it looks like a painting, not a photo. It reminds me of the color plates sometimes seen in early twentieth-century gardening books. To my eyes this image has wonderful qualities of color and composition. And that's not self-praise: I had nothing to do with it. It was pure serendipity!
Posted by McWort at 3:41 PM 3 comments: 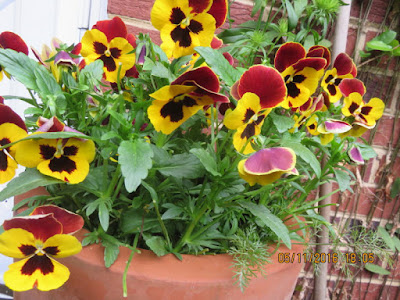 This year of all years I'm glad there are pansies in the garden. They are the most cheerful thing in the garden right now. Week after week of rain has not marred their cheerful faces. If anything, they are better this year than they usually are.
This has been a rough year for some of the early bloomers: the tree peony season this year was mostly a flop: the buds developed during a period of drought and the earliest flowers were small and sometimes misshapen. And then the rains came: one by one the buds swelled with the water and then began to flop and rot. The early herbaceous peonies had the same fate.
The arillate irises would have been ruined but for the improvised rain shelters which did their job well. Last night we had hail during one of the thunderstorms: the thunder and pounding of the hail woke the dog and me up.
Early roses, day lilies, kniphofias, late herbaceous peonies  and bearded irises are blooming now, and so are cornflowers and corn cockle. When the sun returns, the first corn poppies should open.  With all the rain, the coming rose surge should be spectacular. If and when the rain ends.
Posted by McWort at 6:40 PM No comments:

This handsome old-fashioned flower is largely neglected in our gardens now. It reminds me a bit of lavender, and a mass of it in full bloom must be striking. The one in the image above is that sold by Jelitto as "splendens 'Feuer' ". I'm beginning to take a more serious interest in the genera Lychnis and Silene: lots of charming old-timers go around under those names.
Posted by McWort at 6:42 PM No comments:

A few days before Iris kirkwoodiae bloomed, Iris iberica elegantissima bloomed. How's that for an embarrassment of riches?
The name of this iris might be confusing to most modern readers. It has nothing to do with the Iberian Peninsula of modern geography. The name refers to the ancient kingdom now usually called Caucasian Iberia. According to the Pacific Bulb Society wiki, this species occurs in Turkey, Iran and Armenia.
Posted by McWort at 6:25 PM No comments:

In March 2012 I posted about one of the great gardening experiences during my 20s: the flowering in my garden of Iris susiana,  the famous mourning iris. If you don't know the plant, take a look at that post to get an idea of what the excitement is all about:
http://mcwort.blogspot.com/2012/03/iris-susiana-legacy-slide.html

Now, forty-five years after Iris susiana bloomed in the garden, one of its close relatives (perhaps one of its parents) bloomed up at my community garden plots. Ever since I learned about it years ago, I've been on the hunt for a reasonably priced rhizome of this one, Iris kirkwoodiae. It's very similar to Iris susiana; in fact, that long endured longing for the mourning iris  is now largely assuaged.

Posted by McWort at 5:40 PM No comments: