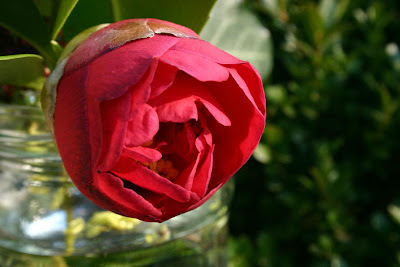 The red camellia shown above has been in this garden for a long time – long as in decades. Early in its stay here it was killed down to the ground during a particularly severe winter. It eventually re-sprouted from the roots; but for a long time, decades again, it made very meager growth. During the last three years it’s been doing much better, and it is now in the five to six foot range and blooming yearly.
When I was in high school I was taken to see the garden of one of the teachers at our school. The only plant I remember from that visit was a camellia, a very big camellia. I remember us standing beside it and looking up into it at the huge red flowers. Local gardens back then probably boasted many such plants, but some very severe winters in the 1970s brought an end to those glory days: most big Camellia japonica in the greater Washington, D.C. area went down during those winters– most never to reappear.
The comparatively mild winters we’re experiencing now have been good for camellias. Once again there are big camellias in local gardens. And if this continues, it won’t be many more years before I’ll be looking up into a big red camellia in my own garden.
Few things in the garden are more beautiful than red camellias in the snow.
Posted by McWort at 6:47 PM