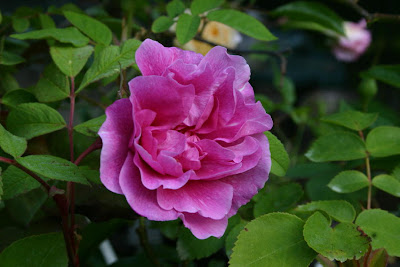 In April of this year I received some rooted rose cuttings from a supplier on the west coast. Included gratis was a plant without a label, a mystery rose. When it bloomed I did not recognize it, although I immediately liked it and decided it was a keeper. Not only was the flower beautiful; the foliage somehow seemed colorful and handsome. I took several pictures and then began to search for a name on the web site of the supplier. I had a hunch what I was looking for was a species hybrid or a shrub rose of some sort. But that first search turned up nothing promising.
Months passed. I’ve been reviewing rose catalogs intently lately because there are several roses I would like for the garden which are not readily available. And then when these do become available they sell out quickly. The early twentieth century hybrid tea ‘Mari Dot’ is an example. When I check these catalogs, I check out every nook and cranny and read all of the text for every variety.

I also do Google image searches, and these frequently link to the sites of other amateur collectors. These photos tend not to be grouped in the usual rose categories – all sorts of roses appear side by side. While absentmindedly going over yet more of these photographs, some rose foliage caught my eye: immediately I thought “I’ve seen that foliage somewhere”. Then I looked at the name of the rose: it was a name I knew. At that point I pulled up some of the images I took early this year when my mystery rose was blooming: bingo, a match!

My mystery rose is 'Thérèse Bugnet', a rose I’ve known about for maybe forty years. It was released in 1950, and I frequently saw the name in catalogs when I was young. It was generally marketed as a rose notable for its great cold hardiness, a rose for zone 4 or even 3 in Canada.

Long before I ever saw this rose as a living plant it played an amusing part in one of my life’s little social dramas. About twenty-five years ago a friend introduced me to a Canadian plant scientist from Guelph. We talked plants, talked intently, ranging over a wide field of favorite garden and crop plants. At one point in the conversation my new friend suddenly shifted the tone of his voice: suddenly it took on a folksier quality as he momentarily played the country bumpkin. “Do you know the rose Therese Bug Net?” he slyly asked. I didn’t miss a beat, and promptly responded “Surely you mean ‘Thérèse Bugnet’ “, giving the name its proper pronunciation. As we both had a good laugh over this, I merrily went on to inquire about Bug Net’s cousin, Bug Loss and his pet ox, Alice.

The rose ‘Thérèse Bugnet’ thus becomes one of those plants which I cherish not only for its intrinsic qualities but also as a reminder of a happy day long ago.
Posted by McWort at 3:03 PM

The rose has no thorns, right?
hansome color too. If scented it definately is a bug net at my house. I have the bug rose chafer which comes at warming of the soil. It makes a good many gardner want to give up or plant colorless unscented commercial roses. Saw them though on the plain janes at the local wally world too though.
any way nice post.