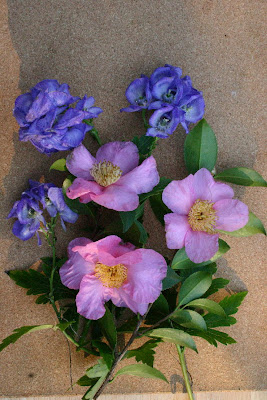 Here’s a combination which comes close to bringing the season of substantial outdoor flowers to a close. So long as the temperatures remain above freezing, there will be something outside to admire, but as we move towards the end of the year the flowers get smaller and smaller and closer to the ground.
Closer to the ground does not describe the two shown here. The Camellia sasanqua are now a twelve foot presence in the garden. The monkshood – this one is Aconitum carmichaelii – grows to four or five feet high. At the tops of those tall stems there are smallish clusters four or five inches long of blooms. This is the one monkshood which does well in our climate. (Aconitum uncinatum, native to western Maryland, is not an easy garden plant in my experience. ) The disproportion between the length of the stems and the comparatively small clusters of bloom has probably kept it out of the ranks of really popular flowers, but for this gardener its season of bloom keeps it in the front ranks.
Posted by McWort at 5:25 PM