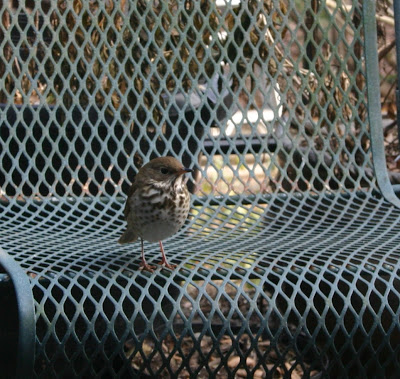 On December 24 I spotted an unexpected visitor among the birds feeding on our deck. At first glance, it looked like one of the white-throated sparrows thronging the food scraps. But then I noticed the beak: that was not a sparrow's beak. And then I got a look at the breast of the bird: lots of big spots. The bird then flew up to the deck railing, facing away from me. It cocked its tail, and not only did I notice that tell-tale movement but I also noticed the slight rusty color of the tail. Does any of that ring a bell? Our visitor was a hermit thrush, Catharus guttatus,  a bird of passage in this area, and a bird most of whose relatives are probably in Central America at this time of year.

I saw the bird again on the next day or two, then I was away for several days. When I returned, I did not see the bird. Then it was back again, and it's been a daily visitor since. When it sees movement in our kitchen, it flies up from the shrubbery in which it seems to spend its time. If I move toward the sliding glass doors, the bird comes closer. When I open the door and toss out a raisin or two, the bird comes up to within two yards of me.