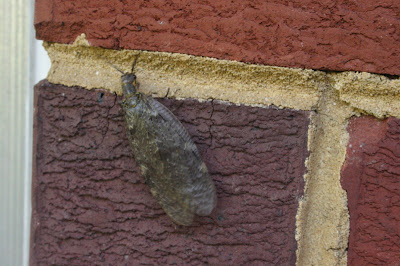 As a youngster I read extensively in natural history, and as a result I know about many life forms I've never actually seen. Three months ago this one stumbled into my life. This is a female Corydalus cornutus, the Dobson fly. The lights in the dining room had drawn it in on a mild May evening when the doors were kept open. This one became trapped inside the glass shade of a lamp - I was lucky to see it before it got fried.. This female was impressive enough; the males have long pincers which make them look fearsome (they are harmless, although the females can give a good pinch).

After catching it, I put it into the refrigerator; the next day, as I released it outside, it was briefly numb enough for me to get a few pictures before it flew away.

Only today I was talking to my neighbor Bill who grew up in rural Pennsylvania. I had mentioned hellbenders; that led to water dogs eventually, but in the meantime we passed hellgrammites. He remembers hellgrammites (the larvae of the dobson fly)  from his boyhood fishing days.