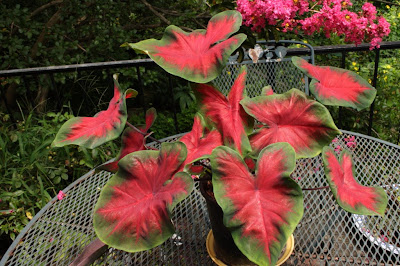 Caladiums take very well to our summer weather, and if you decide to try them, don't be afraid to put them out in the full sun. I've found them tricky to winter successfully, perhaps because I expect them to go from full, lush growth to dry dormancy in a matter of a week or two.

The one shown above is named for the German soprano Frieda Hempel, one of the great singers from the early part of the twentieth century. Most of Hempel's recordings are acoustical recordings  made a century ago, and some of the reissues of them seem to have speed or pitch problems, so it's sometimes hard to form an accurate impression of her voice. She seems to have had an unusually beautiful timbre for a so-called coloratura soprano, and her range and flexibility seem to have been awesome. She was on the roster at the Metropolitan Opera  for a while, but as is so often the case with such prodigiously gifted singers, she found concertizing a better investment of her time.

Many of her recordings have been uploaded on YouTube, although my favorite was not there the last time I checked. That is the recording she made sometime between 1907 and 1910 with the Latvian tenor Hermann Jadlowker of the big duet from act two of Meyerbeer's Les Huguenots.  Here the beauty of her voice and its astonishing flexibility come through well, and the ending is thrilling. If you don't know Jadlowker's recordings, try to find some. He had a voice which in recordings comes across as loud and a bit raucous, a sound which you might think would not work with a delicate voice such as Hempel's.  They make a great pair in the Meyerbeer duet. In his other recordings you can hear that great rarity, a tenor with a good trill.