Biscuit gets a big gold star 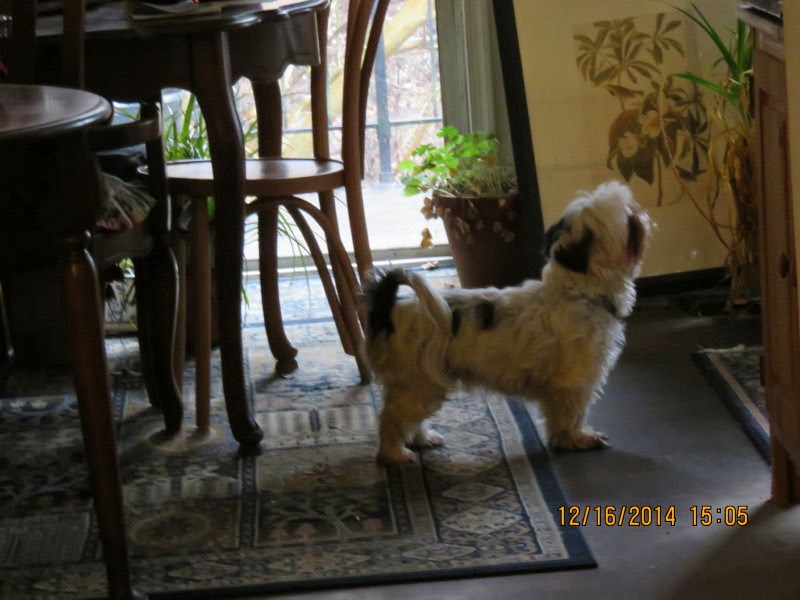 Wayne and I were in Bridgewater last weekend to visit with his mom and other family members. We took Biscuit with us and she behaved very well indeed. We stayed overnight in a pet-friendly motel, and the rest of the time we were in the nursing home. Biscuit was one of three dogs in our party, and they all behaved well.
Here's a funny Biscuit story. Biscuit is very good with children: she seems to enjoy it when children come up to pet her, and she usually rolls over onto her back to let them pet her tummy. Biscuit got plenty of tummy pats during this trip, but one I don't think I'll forget. Three young brothers, the oldest perhaps seven or eight, the next younger maybe five and the youngest maybe four gathered around Biscuit to pet her. The oldest took the lead, and the younger brothers stood back to watch. Biscuit rolled over for him almost immediately. The other two brothers then became very interested: the middle brother moved in closer and reached out, then suddenly pulled back his hand  - he did this several times until he got up the courage to actually touch Biscuit. His older brother was petting Biscuit's chest, so the middle brother began to pet her tummy. Meanwhile, the youngest brother was nervously getting closer and closer. Finally he reached out and began to pet Biscuit's back end. The oldest brother quickly called out "Not there, not there". I had a good laugh over this.
In the image above you see Biscuit at home waiting for her meal to defrost in the microwave oven. She will stand there and watch until the alarm goes off, then she will come and get me.
Posted by McWort at 10:52 AM