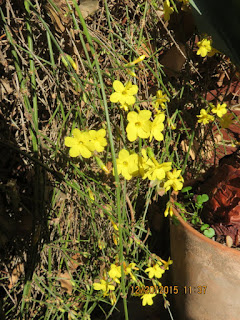 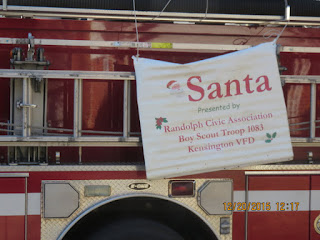 It got cold last night, as cold as it’s gotten so far this season. I got up at about 4:15 and checked the thermometer: ours read 31̊° F. When I talked to Wayne later this morning, he told me his read 24° F. The readings here are generally higher than down there (he’s downstream from here,  at a lower level and south of here,  so it’s down in at least three senses). We had been getting such disparate readings for months, so we decided to use a third thermometer to check out our readings. It turns out that the differences are real and our thermometers are accurate.
It was brisk when I walked Biscuit this morning, but the sun was out and warm; at about 11 A.M. I let her out again, and this time I sat outside to keep an eye on her. The winter jasmine has over a hundred flowers open near the front door, so I moved my chair so that I could enjoy this view. Every time I go out or come in through the front door I pass this plant, and it’s had flowers for me for the last month. It is sheltered by the house wall and the huge fastigiate (but now with a much expanded waistline) Cephalotaxus, so the house entrance is in a little protected nook and its own microclimate. As I sat there, the sun quickly warmed my jacket, and I comfortably settled down into this cozy little niche.
Soon I heard the sirens at the end of our street, and I remembered that this must be the day that Santa Clause comes through the neighborhood on a fire truck – he is accompanied by helpers who distribute candy canes. This has probably happened every year since we moved here – over a half century ago! Mom loved Christmas, and she probably never missed Santa’s annual visit and the candy cane distribution.  So I decided to wait and greet Santa and get a candy cane.
I can remember from long ago seeing groups of people, family groups, lining the street awaiting Santa’s arrival. Today I was the only one out there on our block. At the far end of the street I saw what might have been two other people waiting at the curbside; otherwise the street was deserted. As Santa went by on his fire truck I got some pictures and a candy cane. I got the pictures because I could not help but wonder how much longer this tradition will continue.


I brought the candy cane in and put it beside mom’s picture. I could still hear the sirens off in the distance, and then nearby I heard the voices of excited children. I peeked out the door and saw my neighbor with her two children at the curbside. She was peering down the street, evidently trying to decide which way Santa was going. I went out and let them know that Santa had already passed. At that, her daughter piped up and said that she wanted a candy cane. So at that I went in and got “mom’s” candy cane and gave it to them. That’s something mom would have done!
Posted by McWort at 12:24 PM