Mid-winter florist flowers and a few others 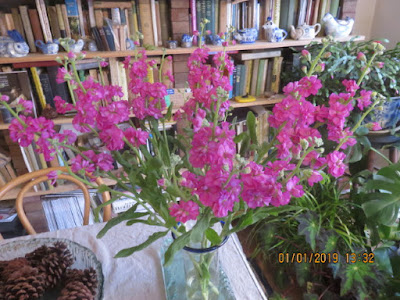 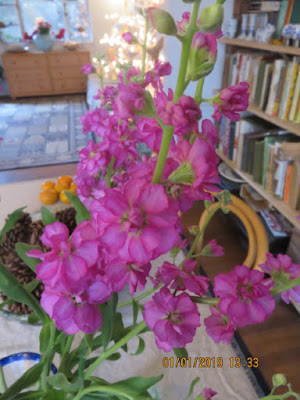 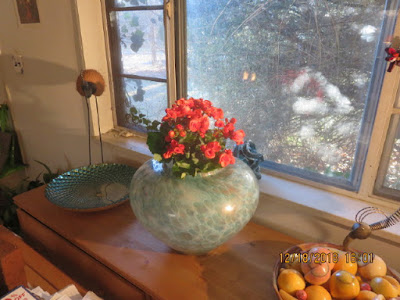 When I was a kid I was intrigued by the popularity of certain flowering house plants which in northern Europe seemed to be hugely popular but which always seemed to die quickly for me.  The Persian cyclamen is a good example: when I first tried them long ago they lasted about a week before they collapsed. The begonias of the hiemalis hybrid group are another. Back in those days I had trouble keeping these going for long, too.

Now that I'm on a retirement income and looking for ways to economize, and now that I realize that heating an entire house twenty-four hours per day for one person is a huge waste of resources, I keep the house much cooler than most of you are probably used to.
It took a while to get used to this, and my resolve was boosted by reading in Gilbert White's late eighteenth- century The Natural History of Selbourne of the mornings when the water kept under his bed sometimes froze on really cold nights.

There have been some rewards to my seeming austerity. I've discovered that those Persian cyclamen from the florist thrive under these chilly conditions. So long as I keep them watered they continue to bloom for months. I've been careful to select the ones with good fragrance: the typical huge Persian cyclamens of the florists are either not scented or ill scented. The smaller sorts, closer to the wild Cyclamen persicum, sometimes have a great scent - like the fragrance of the beautician's cold cream.

A hiemalis begonia on trial this year (the lowest of the three images above)  just gets better and better (i.e. more floriferous)  week after week. It shows no sign of slowing down.

Right now my favorite florist flower of the season is the stock, Matthiola incana (these are probably hybrids of several Matthiola species). That's what you see in the two upper images above. The individual flowers are an inch and a half across and remind me of the blooms of Prunus mume. They are very pretty, and five stems make a handsome display. The ones in the image were purchased a week ago and still look fresh. But I've neglected to mention their best quality: the blooms have a wonderful clove scent, a scent free on the air and capable of filling the air in a still room. I've never seen these in a local garden, nor have I ever heard anyone speak of them as garden plants. Old books suggest that they are typical burn-out annuals which do not tolerate high temperatures. In the parts of England and Europe where cold summers (by eastern American standards) are the rule, they have been garden essentials for centuries. I've seen early twentieth-century German seed lists which catalog a prodigious number of varieties, few of which probably survive.

Here's something interesting for those of you who like words: you probably know the botanical name Leucojum used for a group of early blooming amaryllis family plants. That name is derived from the old Greek words for "white" and "violet". The modern German word for stocks is Levkoje (say lef-ko-yer, where the italicized  r is not fully pronounced). It looks a lot like Leucojum, doesn't it? As it turns out, the German word is also based on the old Greek words for "white" and "violet".  I'm not sure when this word became standard in modern German; a quick look in the mid-sixteenth century herbal of Fuchs does not seem to use this word.

The only stock I've grown in the garden is the related night-scented stock, Matthiola longipetala (long known as M. bicornis).  This is one of those annuals which one sows by scattering the seed in late winter or earliest spring. The resulting plants are nothing to look at, but when they begin to  bloom on late spring or early summer evenings,  they can stop garden visitors in their tracks - that's how powerful the delightful scent is. This used to be a garden essential, but I get the impression that few gardeners now even seem to know about it.

There are other intensely fragrant crucifers which have similar fragrances. The dame's violet, Hesperis matronalis, is one of them. Once a garden favorite, it's apt to be given weed status now, but that amazing fragrance earns it a place somewhere in many gardens.

Years ago, I tried to puzzle out the Russian name for a lily ( an obscure early twentieth- century hybrid raised by Russia's Luther Burbank, Ivan Vladimirovich Michurin, Иван Владимирович Мичурин). The lily name was Romanized as "Fialkovaya" .  The "Fialko-" part of the name is the Russian word for violet,  фиалка.  A bad translation of the name is "orchid lily" as if the lily were named for the color orchid. But the lily was really named for its scent, and while it might have been named for violet in the sense of sweet violet or Parma violet,  I have a hunch it was named for the scent of Hesperis, a scent often likened to that of sweet violet.

One modern Russian name for Hesperis matronalis is ночна́я фиа́лка (night violet), but a good Google search turns up other translations with a vaguely suggestive sense ( such as "mattress party violet" !).