Once again I’m amazed at how much information can be derived from a botanical name. And I’m caught by surprise at how much I sometimes don’t know about what I think of as familiar plants.
The plants from which the branches shown here were cut are plants I’ve observed for more than twenty-five years. For almost all of that time, I knew them as the components of a low, boxy hedge under a low window, a hedge rigorously pruned yearly to maintain that low stature. When asked back then what they were, I said “Berberis julianae” but didn’t give it much thought.
This year the hedge did not get pruned, and it quickly transformed itself into something unexpected. If you look at on-line photos of this barberry, you’ll see plenty of photos which suggest that it is just another broad-leaf evergreen with little leaves. In fact, that’s the way I thought of it for all those years. In general, these photos do not give any indication of the disposition of the foliage on unpruned plants.  That formerly neatly pruned hedge has sprouted a crown of yard-long wands the length of each one punctuated at regular intervals with what at first glance seem to whorls of five leaves. The branches are bare between the “whorls”, and on closer examination these “whorls” are seen to be neat fans of leaves attached to one side of the otherwise bare stems. But there is more to it than that. Here’s what Bean says ( Bean’s Trees and Shrubs Hardy in the British Isles the seventh edition from 1950. I’ve been lucky enough to have this three-volume set for over fifty years): As you read this, keep in mind that barberries and mahonias  are closely related. “ The morphology of the leaves and spines of barberry is interesting. In the true barberry group  [i.e. Berberis not Mahonia], the “leaf,” as we call it is really the terminal leaflet of a pinnate leaf, the side ones of which are suppressed, and the tuft of leaves as a whole is a branch in which the internodes are suppressed. Then the spine, (usually three-parted, but sometimes simple, sometimes much divided), in the axil of which the tuft of leaves is borne, is a metamorphosed pinnate leaf.”

About the name: yes, I had the right name, at least as far as spelling was concerned, but other than statements indicating that it was named for the wife of the taxonomist, there was not much more of interest. Bean was no help here, and his citation of Berberis julianae C. K. Schneider blinded me to something already very familiar to me.
I wanted to know if this C. K. Schneider was an English Schneider (in which case his wife’s name would have been pronounced Juliana) or a German Schneider (in which case her name would have been pronounced You- lee-AH-na). So I turned to the Zander Handwörterbuch der Pflanzennamen  (which has been in print in various editions since 1927! I have the 15th edition of 1994.)  And there I got my answer quickly - and with it a reminder of how dense I can sometimes be. C.K. Schneider was none other than Camillo Schneider (Camillo Karl Schneider), Germany’s and probably Europe’s foremost dendrologist at that time. Among his other accomplishments: he published (from about 1920 to 1942) with Karl Foerster Gartenschönheit. I’ve been collecting issues of Gartenschönheit  for decades, and knew him as Camillo Schneider. He and Foerster also co-authored numerous popular garden books. The C. K. Schneider in the formal citation of his name in botanical nomenclature meant nothing to me. 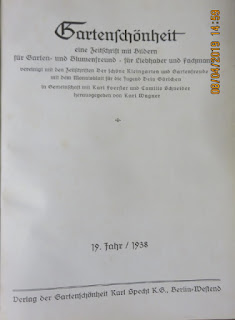 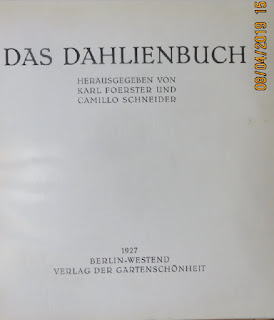 Here's a view of Foerster's home garden; this is from the 1922 edition of his Vom Blütengarten der Zukunft : 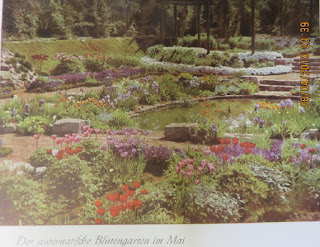 In the days before WWI Schneider visited the Arnold Arboretum and worked briefly with Sargent and Wilson. His major work, on the genus Berberis, was destroyed before publication in the bombing of Berlin during WWII. He and Foerster both survived the war, but Schneider’s Berlin and Foerster’s Potsdam were in Russian held territory, and they lived out their lives in relative obscurity, seemingly little remembered here in the West. Foerster’s home garden fell into ruin, but has in recent years been renovated. Two of the most important people in central European botany/horticulture are all but unknown to Americans born after the war.
Now, more about that name julianae: that’s the spelling Schneider used when the name was published. The name is sometimes spelled julianiae. Why? It’s a case of dueling rules in the code. In general, botanical names based on a person’s family or personal name are to be treated as compound words.  The compound has at least three components: the family or personal name, the Latin connective letter “i”, and the final suffix indicating the grammatical function of the word. This is expressed in the case (usually genitive)  and gender of the of the word. For instance, in the epithet wilsonii, the name is Wilson, the connective vowel is “i”, and the suffix for grammatical function (case and gender) is “i”. Although we commonly think of this as a ‘Latinized” word,  only the final “ii” is Latin.
Here’s the potentially conflicting rule in the code: in the example above, the “ii” was used because wilsonii is a compound word. Wilson is not Latin, so in order to “Latinize” it, one has to add the “i” to form a compound word and then add another “i” to indicate the case and gender.
But, if the name in question is a name actually used in true Latin, it is not necessary to form a compound word: one simply adds the appropriate suffix to indicate the grammatical function/ case and gender. For instance, the Roman male name Justus, if used for the name of a plant in botanical nomenclature, would be written justi, not justii or justusii.
Now back to julianae/julianiae: if you accept that the name Juliana was in fact a Roman name, then the proper spelling of the botanical name is julianae. If you insist that Juliana is not proper Latin, then the spelling julianiae (i.e as a compound non-Latin word using the “i” connective vowel – and this spelling has been used) or even julianaiae (which has not been used) are available. According to the USDA Plants Database/Plants Profile, the spelling “julianiae” is cited as an orthographic variant. The same USDA site gives as a tone deaf common name Julian’s barberry. How about Juliana’s barberry? It was named for Juliana Schneider, not Julian Schneider.
This is going on a bit, but I can’t pass without complaining about this pet peeve in the pronunciation of botanical names in the Anglophone word: in those words which end in -ii, why is the first “i” pronounced “ee” and the second “i” pronounce “eye”?   Except for the fact that the first i” is the connective vowel and the second one is the one indicating grammatical function/case - gender, they are the same Latin letter. They are not the English letter “i”, they are the Latin letter “i” which is pronounced  “eh” if short, “ee” if long.  And there is another important difference in Latin, and it’s an important one to know in order to place the stress correctly: the connective vowel “i” is short. And here’s something else handy to remember: in Latinized Greek compound words, the connective vowel is “o” and it is a short “o”. Some smarty-pants reading this might be thinking “how does anyone know if it was long or short, that was thousands of years ago?” If you know the Greek alphabet, you already know the answer: Greek has different letters for short “o” ο (omicron) and long “o” ω (omega).
Here is a link to an image of Camillo Schneider: