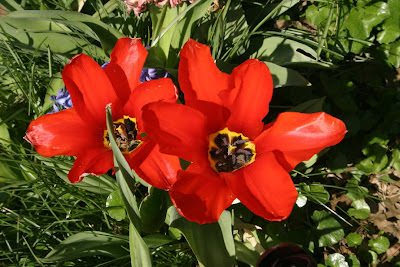 The tulip in the image above is the old favorite Red Emperor, or as it is officially named 'Madame Lefeber'. Although tulips have been cultivated in the Netherlands for centuries, the official naming of cultivars did not begin until as recently as the 1930s. The tulip shown here is a cultivar of the wild Tulipa fosteriana. The story behind the introduction of this cultivar is a bit sketchy, but the general outline is that what became known as Red Emperor appeared in one batch out of many of wild collected Tulipa fosteriana. Was the original Red Emperor a single plant which went on to be propagated as a clone? Or was the original Red Emperor made up of multiple plants from a distinct wild population? The early accounts I have seen do not seem to answer this question. Throughout most of my gardening life it has been better known as Red Emperor, but recently more catalogs are listing it as Madame Lefeber.
No other wild tulip which I know has larger flowers, and if there are hybrids with larger flowers I have not seen them. If I could have only one tulip, this might very well be the one.