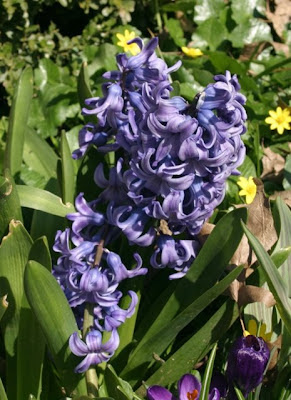 Garden hyacinths are blooming now, and each year my affection for these most domesticated of bulbs grows. Although there have been hyacinths in this garden since the beginning, I’ve never paid much attention to them. And until recently I’ve always taken them for granted. In our climate they generally take care of themselves: once planted, they are likely to return indefinitely.
Last year I made an effort to acquire as many different hyacinths locally as possible. Over two dozen different cultivars were on offer in local shops. The advantage of buying the bulbs locally is that you can buy one each of as many different cultivars as are on offer. In the mail order catalogs they are generally sold in units of ten or so. That’s great for those who use them for bedding plants, but it’s very inconvenient for those of us who simply want to sample the variety available in hyacinths.
Hyacinth colors range from soft and delicate to rich and saturated, and there is not a strident color among them. The oranges and reds, colors which can require careful handling in other plants, are gentle in hyacinths, partly because the reds are not really red and the oranges are so softened by a milky suffusion. The colors remind me of cake icing colors, and to my eyes they all harmonize.
I’ve found that learning to recognize hyacinth cultivars takes some practice. There are so many white, pink and blue cultivars which look alike at first glance. Come back a few days later and be prepared for them to look a bit different: hyacinth colors morph agreeably over the life of the bloom, often acquiring a silvery sheen or a white rim to the tepals. Heat and bright sun will accelerate this process. The yellow-flowered sorts in particular quickly fade to creamy white.
I was in the army in the mid-60s, stationed briefly at Ft. Bragg in North Carolina. It was February. The peepers were out, and here and there on the base I would see tazetta daffodils struggling to bloom. And hyacinths: they were short, seemingly stunted plants which pushed their cones of pastel colors up through the sandy soil along the foundations of some of the residential units. Who in the world had planted them, and how long had they been there? Seeing them made me achingly nostalgic for my home garden. And it just occurred to me that although I’ve seen thousands of hyacinths in my lifetime, those are the only ones I remember vividly. Perhaps because at the time I no doubt wondered if they might be the last I would ever see.
Nothing assures a plant of a place in this garden as much as fragrance does. The fragrance among the cultivars does vary a bit, but to my senses not by much, That in part is why I’ve never been focused on the various cultivars: in the past I never cared about the colors that much and the fragrance in most is similar. But is it? One of the major mail order bulb suppliers describes the fragrance of hyacinths as like that of peaches. Peaches? I’ve never noticed that. This year I’ll be sampling from among the more than two dozen cultivars blooming or about to bloom to see if any are peachy.
Posted by McWort at 11:04 AM