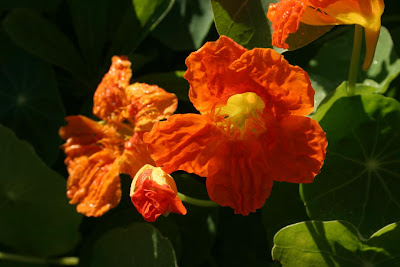 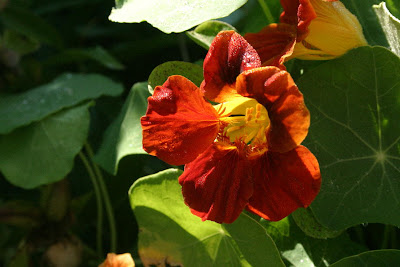 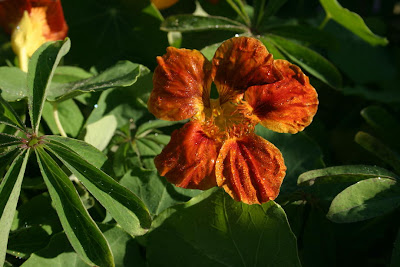 I don’t remember when I first became aware of garden nasturtiums. They were among the familiar flowers which grew in the neighborhood gardens of my childhood, and they might in fact have been among the plants my mother planted each year around our Silver Spring home. And I think I remember the thick clusters of black aphids which cluster under the leaves as well as I remember the flowers, their fragrance or their taste.

Nasturtiums have personality: they are distinctive, and you’re unlikely to confuse them with anything else. The seeds are so big and easily grown that generations of writers have recommended them for children’s gardens. The seeds look like small chick peas. They bloom in familiar colors; I think of their color range as the color range of wall flowers – reds, yellows and those very dark red-browns and tans. They manage to be easily grown and familiar, and yet at the same time they retain a mysterious, sophisticated quality.

The ones shown here are from a packet of seed labeled “Jewel Mix” as distributed by W. Atlee Burpee & Co. Garden nasturtiums, which are by nature perennials, are available in climbing forms, semi-climbing forms and forms which grow as compact clumps. The flowers are single or semi-double in the usual seed raised forms, but fully double forms propagated from cuttings are sometimes available. The flowers come with and without spurs; the ones without spurs are apt to face upright. My favorites are the ones in dark, muted colors, single, with spurs and fragrant.

In the very old days, garden nasturtiums were sometimes called “Indian cress”. The peppery fragrance causes some people to scrunch up their nose when they smell them, and that in effect is what the Latin term nasturtium means. Botanically, cress, as in watercress, is a crucifer, Nasturtium officinale. On the other hand, our garden nasturtiums are botanically Tropaeolum majus. In old books the names T. minus and T. lobbianum (or T. peltophorum) appear: these are species sometimes cited in the ancestry of the garden nasturtium. Tropaeolum are generally placed in their own family Tropaeolaceae which is related to geraniums of the Geraniaceae. If you look closely at one of the images you can make out foliage of Oxalis lasiandra: the Oxalidaceae are also closely related to these plants.
Our garden nasturtiums are “cress” only in the culinary sense: all parts of the plants appear to be edible and palatable and do have a peppery quality which is a refreshing addition to salads or chopped into cream cheese for sandwiches. Even the seeds (sometimes pickled as a caper substitute) are edible.
The flowers in the images above were photographed early in the morning; the orange ones still show the crinkled petals which have not yet full expanded. These remind me of opening poppy flowers.
Posted by McWort at 2:15 PM