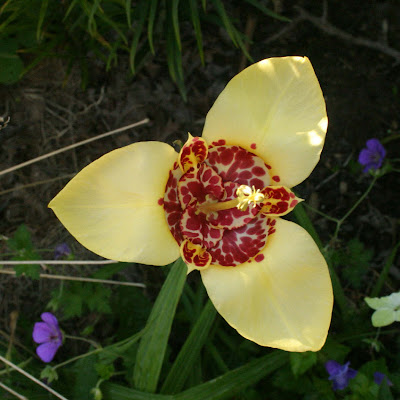 This startling flower, Tigridia pavonia, has been known in the English-speaking world since at least the sixteenth century: there is a crude drawing of it in the Elizabethan edition of Gerard’s Herball. I would not be surprised to learn that Tigridia had been introduced to Europe long before that by the Spanish, but I can’t cite a source for an actual date of introduction.

In the English-speaking world the name Tigridia has traditionally been interpreted as having reference to tigers – and more than one merry commentator has noted that tigers have stripes, not the spots seen in these flowers. I think a more sensible interpretation takes into consideration the likelihood that the first descriptions in a European language were in Spanish, and in Spanish the jaguar is called El Tigre. And jaguars are spotted. That explains my choice of title for this post.
Posted by McWort at 11:01 AM