November, the busiest month of this gardener's year 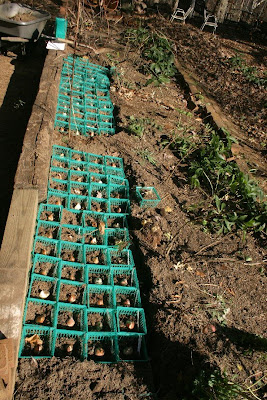 If you go back and look at the postings from 2007, you'll notice that there were no postings in November. Today's post might very well be the only one for November of this year. Here's why: November is the busiest month of the gardening year for me. On top of that, it's also a hard month to get good value for your time: not only are the days getting shorter, but the sun is low in the sky and frankly very annoying. Luckily, the sunshine is abundant, and it usually takes the edge off the bite in the wind. We'll soon be reaching the point where the sun will rise hours before the ground defrosts enough to work - if it defrosts at all.
This is the time of year I rework the garden; it's the time of year when the plans for next year are put in place. It's prime transplanting time for most herbaceous and woody plants. And this year, more than anything else, it's bulb planting time.
Beginning in late May, I dug as much of the bulb collection as I could. Little by little I've been replanting it during the last few weeks. There is a lot of documentation involved, and that really slows things down. New beds have been prepared.
In addition to that, I binged on tulips again this year. The last time was about five years ago. What do I mean by binging on tulips? I bought one each of every tulip on offer in local garden centers and ordered others from mail order suppliers. I do this every so often just to see what these tulips look like in real life.
In the past I let these tulips on their own after blooming, and as a result most did not survive for long. Then, years ago, I noticed a place in the garden where the tulips persisted indefinitely and bloomed yearly. The plants got smaller, and the clumps got thicker, but they were still there and evidently thriving. This was happening at the edge of a dry-walled raised bed: the drainage there must have been excellent. I tried another group of tulips in a different raised bed and five years later they are still blooming freely each year.
The simple truth about tulips, a truth about which almost every tulip grower in this area is in deep denial, is that under typical garden conditions tulips must be dug for the summer.
Raised beds provide one alternative to digging.
Once you realize that yes, you can grow tulips in this area and have them year after year, it's hard to resist the urge to collect them in all their wondrous variety. In a small garden such as this one, there is hardly room for one of each of everything available - and that's with close spacing. For years I tried growing them in the ground with labels buried with the clumps, but that system was not really satisfactory. For one thing, once the plants had died down, it was difficult to locate the clumps - and to be sure where one clump ended and the next began. At digging time there were always mix-ups - with the result that the stocks became mixed. And often bulbs were missed altogether.
Last year I tried planting bulbs in plastic berry baskets. I've been very pleased at what a difference this makes: now I can grow hundreds of varieties closely spaced without any serious concerns about mixing bulbs. The digging goes quickly, too.
In the image above you see the back edge of the raised north border where the main concentration of the "one-of-each" tulip collection is growing this year (the site rotates from year to year). There are over two hundred different cultivars planted here.
Posted by McWort at 10:44 AM

I would be interested in how you plant your tulips in the plastic fruit baskets. What a neat idea? It would certainly keep them in an orderly way..bar any squirrels outsmarting you! I've seen where you can buy cages to plant your bulbs in but seems like a lot of expense and digging for the space needed. I am looking for a good flower gardening club in Montgomery County that meets during the daytime. Any suggestions?