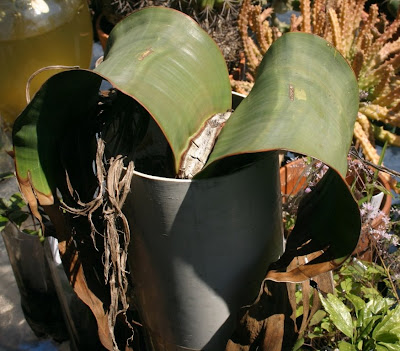 The Welwitschia gave me a scare about two weeks ago. It went from a healthy green to a pale, dull green with much too much yellow. It was still green, but it reminded me of pea soup.

I've had this plant for eleven years now; I acquired it as a one-year old seedling in 1997. It was raised from Silverhill seed by a member of our local rock garden group. Earlier this year I acquired more fresh seed from Silverhill, but I have not attempted to germinate it yet. I sent Rachel Saunders a photo of my eleven-year-old plant. When I did this, a little voice warned me that some envious demon lurking in the background might interpret this as the sort of boasting which merited a bit of taking down. So when my plant began to lose color, I momentarily wondered if I was getting what I asked for.

My first impression was that I might have over-watered the plant. I carefully tipped the pot sideways to see if any water would drain out. But there was no sign of water. Then I tried to remember the last time I had watered the plant. Hmmm......maybe it just needs a drink. So I watered it. Within a few days the good, healthy color began to return and I breathed a major sigh of relief. I'm very attached to this plant. I expect it to be the Gila monster of my adult life (when I was a kid I had a Gila monster which lived for a bit over twenty-five years).

Several years ago the Welwitschia put on another, more dramatic scare. Again, it was shortly after I brought it in for the winter. For several days it sat in my bedroom far from any window and without any supplementary light. And then it happened: its usual healthy green color began to change. The color became streaked with mustard yellow and rusty red. At one point most of the surface of the leaves was brilliant iridescent blue such as is seen in Selaginella uncinata. It was a bizarre sight, and I was panic stricken. But after a few days under fluorescent lights the odd colors began to fade, and eventually it was back to normal.

When I'm a very old man I might will this one to some public collection; but for now it's staying put.
Posted by McWort at 3:14 PM