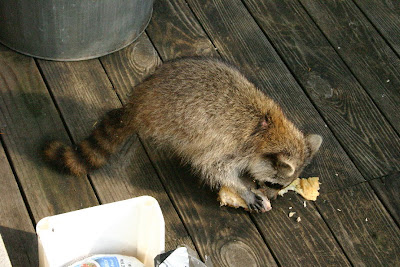 Raccoons are a common sight here: they raid the garbage cans nightly, they dig in the garden, they party on the roof, they make a mess in the pond and terrorize the gold fish. They are also charming, engaging, intelligent, quick to learn and brave but not aggressive.
They are also vulnerable to rabies, and folk wisdom says stay away from any raccoon wandering around in the daylight. The other day while walking Biscuit, I noticed a neighbor peering into the bushes around his house. He told me there was a sick raccoon in the bushes, and he was waiting for "animal control" to come and pick it up.
The one in the image above was doing just that, wandering around in broad daylight. I was sitting in the kitchen reading the newspaper and out of the corner of my eye noticed something outside, something big, crossing the deck only a foot or two from where I was sitting. It was the young raccoon you see above. It looked half starved and a bit sickly. I opened the door a bit to shoo it away, and it just sat there looking up at me. And then I noticed something else: it has an open gash on its back.
I took a quick look in the refrigerator to see what I could give it, give it for what might be its last meal. A moment later it was gnawing on a piece of chicken. After it left the deck, I encountered it again in the back of the garden. I think it's a female, and I'm hoping that it will show up a few months from now with some young ones.
Posted by McWort at 10:49 AM