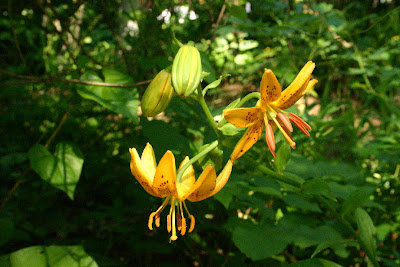 Lily season 2009 opened yesterday with Lilium hansonii, Peter Hanson’s Lily, and one of its hybrid progeny, a lily I call “Preston Yellow”. Both have interesting histories.

Lilium hansonii was introduced from Japan in the 1860s. To this day there is an element of uncertainty with regard to the natural distribution of this lily. There are seemingly wild populations in both Japan and around Vladivostok on the mainland; but there is suspicion that these are introduced. The known sexually reproducing, indigenous populations are apparently all Korean.

The form of Lilium hansonii introduced to the West was evidently clonal in nature: all the bulbs introduced were pieces of one original plant. Throughout the nineteenth century it was standard practice to multiply this species from bulbs and not from seed. Viable seed was rarely set. It wasn’t until the middle of the twentieth century that new, non-clonal material was introduced from Korea, material collected by Richard Lighty. There have been subsequent collections of non-clonal material also. These newer collections evidently did not prove to be as easily grown as the original introduction from Japan.
Nor has any effort been made to maintain a distinction between the original clone and subsequent introductions.
The lily is named for one Peter Hanson (who?), a nineteenth century Brooklyn (yes, I didn’t make that up) lily enthusiast. It gets stranger. The lily was named by Max Leichtlin, one of the bright lights of nineteenth century horticulture.
Little is known about Hanson, and what I know mostly comes from some notes put together by Marco Polo Stufano years ago. Hanson, an immigrant from Denmark, collected lilies for his Brooklyn garden. He corresponded with Henry Elwes. He grew Cardiocrinum giganteum. In Hanson, it would seem that lily culture in North America was getting off to a splendid start. But it all seems to have come to nothing: Hanson was not the harbinger of great things to come, he seems rather to have been an anomaly. If this lily had not been named for him, he probably would have been utterly forgotten. And if there was ever a "Brooklyn school of lily growing", it, too, is gone without a trace.
The old clonal form of Lilium hansonii has the reputation of being about as tolerant of garden life as any lily. This is not one of those lilies which after being planted in November bursts into glorious bloom eight months later. It’s a slow, deliberate grower. It might take several years to become truly established. But once it digs in, it stays.
It emerges very early, so early that in areas with late freezes the inflorescence is sometimes lost. The plants do not seem to suffer long-term damage from this. David Griffiths mentions that in all the years this species was grown at the Bellingham Experiment Station in Washington State, it rarely if ever bloomed because of late frosts. Yet the stock grew and increased without other problems.
Because this lily blooms so early in the lily season, it is rarely seen at the shows unless growers from north of us are in attendance. It's also hard to determine how widely this lily is grown: yet I know that it is cherished in many gardens other than my own.
Posted by McWort at 10:34 AM