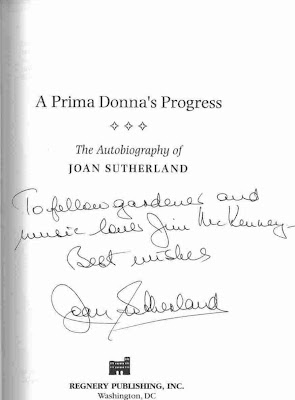 My first acquaintance with Joan Sutherland was in the mid sixties when she was touring Bellini's Norma with Marilyn Horne (Jackie) and an unknown tenor, Pavaroti. Oh My!

I flew to New York to hear a Sutherland/Horne Norma at the Metropolitan Opera. What an incredible experience that performance was! Horne and Sutherland made amazing music together. Years later, when a recording of Norma was issued featuring Sutherland as Norma and Caballé as Adalgisa, I thought to myself something like “that’s got to be the perfect duo for those roles.” But how wrong I was: the timbres of the voices of Sutherland and Caballé were too much alike – in some of the duet work I could not be sure who was really singing. But with Sutherland and Horne there was never that sort of uncertainty: those voices compliment one another perfectly. Sutherland and Horne together produce a sound which is solidly in a century old tradition of recorded duets from Norma. Find, if you can, the recording of the duet ‘Ah! sì, fa core e abbracciame” from Bellini’s Norma made by Lilli Lehmann and Hedwig Helbig in 1907; compare it to the duet “Mira, o Norma” made by Ponselle and Telva in 1929 and then to either duet as recorded by Sutherland and Horne. The similarities of style and timbre are amazing.