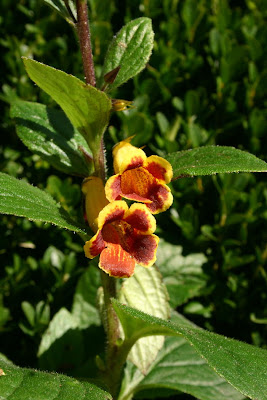 A year ago I had no idea I would ever be writing this post. The plant shown above, Titanotrichum oldhamii, falls into the category of "the fabulous plants of my youth". I've known about this plant for decades, but until a few months ago I never thought I would actually see it or grow it. It was named almost exactly a century ago for a nineteenth century collector. I learned about it from a book published in 1975: Miracle Houseplants. The authors of that book had never seen it, and did not have access to much good information about  it. They repeat the hypothesis that it might be of hybrid origin. They mention that it gets to be five feet high: that got my attention!

Now fast forward thirty-five years: it's now well known that there are thriving, sexually reproducing populations of this plant in Taiwan, mainland China and the southernmost Riuku Islands. It has been collected repeatedly, and the material in cultivation is no longer clonal. And it's available from a catalog near you; Plant Delights sells the clone they collected in Taiwan in 2008 for a pittance.

Gardening not only teaches patience, it eventually rewards it!
Posted by McWort at 12:14 PM