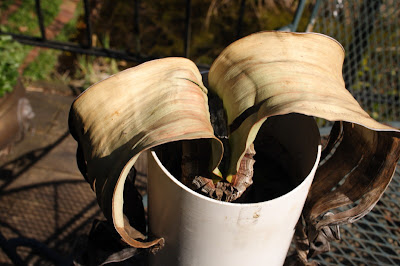 The week before last I took a look at the Welwitschia and got a nasty shock: it seemed to be dead. I've had this plant for fifteen years, but even so it occasionally surprises me. The leaves looked dry as cardboard and had lost most of their color. At the base of each leaf there was a hairline of seemingly sickly, pea soup green. That was the only green evident on the plant.

What in the world happened? In retrospect, I think I simply forgot to water it. I gave it a good soaking and changed the arrangement of the lights. I made sure it stayed moist and under intense light. After about a week of this therapy, I started to put it outside in the sunlight any time the air temperature was over 40 degrees F.

Now, between frequent knocks on wood, I'm pretty sure it is on its way back. The line of green seems to have widened just a bit. Let's hope the mirabilis part of the name proves true.

In the image above you'll have to look hard to see any sign of life.
Posted by McWort at 9:31 AM

Oh my. Give it my best wishes!