Epiphyllum oxypetalum Oops! I missed it... 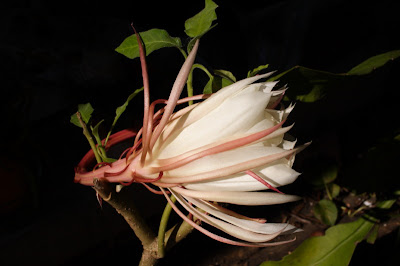 For decades I've had one of the plants known as night blooming cereus. Long ago it was a sort of vegetable octopus, with stems leaning out in all directions to occupy about a cubic yard of space. Hauling that mass in and out as the seasons changed got to be too much. The day finally came when it was pruned back, a lot, and then the day came when a cutting was made and the rest of the giant was discarded. For years the plant grown from the cutting has survived rooted in about two cups of dirt. It's one tough plant!

This year I gave it a bit more attention and eventually it was moved into a comparatively big pot of good soil.  About a month ago I noticed something unexpected: a flower bud seemed to have appeared. The flower buds of this plant are a big deal. For a plant whose flowers are open only for one night, they seem such a waste of material - until you consider the size of the fruit which will result if the flower is successfully pollinated.

I've been watching the bud intently for the last week: it got bigger daily, and the big day was obviously near. Last night when I got home I forgot to check it out. When I got up this morning, I realized that I had missed the show: the huge flower was there but in a state of partial collapse.

I do that on occasion, watching so carefully until the fated day when I forget unless I happen to go out and catch that intoxicating fragrance near bedtime.

Every time a piece breaks off I root it. They're hard to give away except to someone who knows what to expect from such an ungainly plant.

Watch closely for another bud; there is time for another round of blooms before the days grow short.