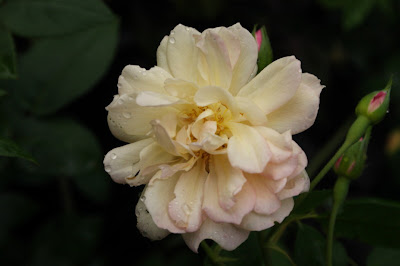 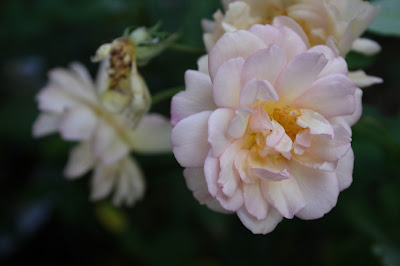 I don't think it's an exaggeration to say that American horticultural literature began in New England and then gradually radiated south and west. So it's no surprise that the older literature treats the teas and tea-noisettes as tender roses. By the time strong horticultural traditions had become established south of New England, the vogue for teas and tea-noisettes was passing, yet the notion that they were not hardy was still embedded in the old literature.

As a youngster I occasionally heard the term tea rose; but it was always used improperly to refer to hybrid tea roses. I doubt if any one in my gardening circles had any experience of true tea roses, and it's just as unlikely that any of them had even heard of tea-noisettes.

What are the tea-Noisette roses? The term Noisette rose refers to a fleeting moment in the history of rose hybridization: no sooner did they appear and their potential become recognized than they disappeared, their progeny hybridized beyond recognition. The original Noisettes were derived from a hybrid known as 'Champneys Pink Cluster' rose, itself not a Noisette unless you insist on the curious filius ante patrem mentality of some modern rose clasifications. Champneys is assumed to be a hybrid of the musk rose and something else. That sounds indefinite, but there is no certainty about either parent; and given the ambiguity about just what "musk rose" means, it's beyond indefinite. Whatever the parents were,  they imparted to the Noisettes the vigor of climbing roses and a sublime scent. The other parent might have been 'Old Blush'.


The Noisettes appeared on the scene during the most important phases in the development of modern roses: European rose growers were enthusiastically exploring the potential of the newly introduced china roses and tea roses. The Noisettes were quickly pressed into service in these hybridizing efforts, and the results of the tea-Noisette crosses are by some rosarians regarded as a peak never surpassed.

Among the highly regarded tea-Noisette roses is this one, Desprez’s Yellow or as the name is more usually given ‘Jaune Desprez’ or ‘Desprez à fleur Jaune’. In looking at the pictures, the first thought which is apt to arise is probably “But it isn’t yellow!” But in its day it was about as yellow as a hybrid garden rose got. Truly yellow hybrid garden roses were soon to follow,  but 'Jaune Desprez' has more than color going for it, and it's been a cherished rose since its introduction.

It's also hardier than many of its tea-noisette relatives. There are old records of its successful cultivation at Philadelphia, and a half century ago Richard Thomson was still growing it successfully at Philadelphia. Mrs. Keays found it in a garden of her Lusby, Maryland neighborhood. More recently Henry Mitchell grew it in Washington, D.C. Careful siting helps, but it does not need coddling.

Everyone who loves this rose seems to agree that its fragrance is one of the great rose fragrances.
Posted by McWort at 8:02 AM