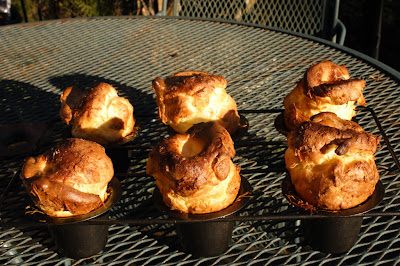 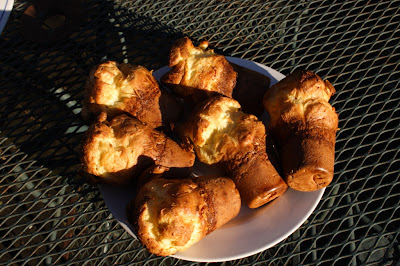 I fell asleep last night resolving to make popovers for breakfast today. One of the tricks to integrating popovers into the morning routine is to get them into the oven before you start to do anything else. That way the 45-50 minute  cooking time passes quickly. By the time they are ready and you sit down to eat them, you can reward yourself with a few extra ones for what you've already accomplished that morning. If the only thing you've accomplished that morning was to read the morning paper, then be assured that a nice plate of popovers is a great way to assuage the anxiety provoked by reading the news. If you've done nothing but loaf and daydream while they were cooking, go ahead and dig in anyway: after all, you made them!

The last post on popovers was done in 2009; the image above looks a lot like the one posted back then, but the ones you see were baked and consumed this morning.   Popovers are very photogenic, aren't they?
Posted by McWort at 10:58 AM