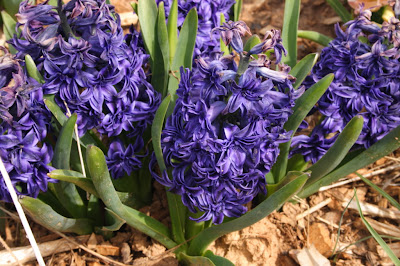 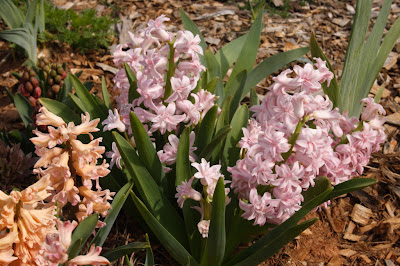 Double -flowered hyacinths, those where the normal six perianth segments are multiplied, are probably as old in western gardens as the typical single sorts. Parkinson, nearly four hundred years ago, menitons several double-flowered sorts in cultivation in his time. The ones we grow now are sports (somatic mutations) of forms with normal flowers. Since most garden hyacinths have that well-fed-to-the-bursting-point look, you might think that these double flowered sorts are beyond the pale. In fact, from a few feet away it's hard to see that the flowers are doubled, and they make a fine effect in the garden.
Five sorts currently grow in the garden, and there are a few others still in commerce which I have not grown yet.
In the images above you see 'Crystal Palace' (dark blue)  and 'Chestnut Flower'. The chestnut flower in question is not the flower of the chestnut (Castanea) but rather the flower of the hybrid horse chestnuts such as Aesculus × carnea.
Posted by McWort at 10:52 AM