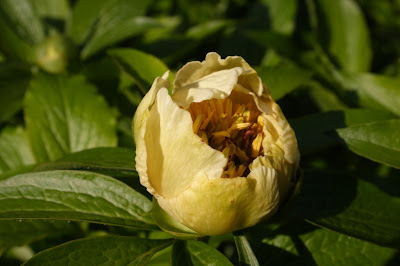 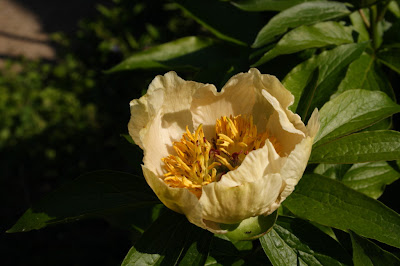 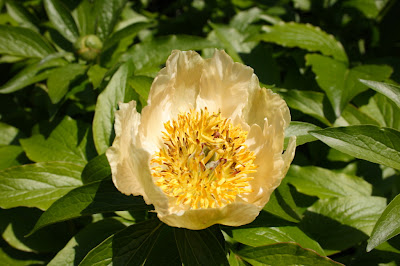 Hybridizer Arthur Percy  Saunders did more than anyone else to broaden the genetic base of garden peonies. He systematically produced hybrids which included as many as four different species in their background. This one, ‘Roselette’s Child’, has three species in its background: Paeonia mlokosewitschii, Paeonia tenuifolia and Paeonia lactiflora. It is said to have been raised from a self pollinated blossom of the hybrid ‘Roselette’.


The nomenclature of the wild peonies continues to shift; the plant he (and many of us) knew as Paeonia mlokosewitschii is often now made a form of Paeonia daurica. To generations of peony growers it was long famed as the only herbaceous peony with truly yellow flowers. A huge effort on the part of peony hybridizers went into producing yellow-flowered garden peonies. Few of the hybrids are truly yellow: the yellow pigments seem particularly sensitive to heat, and generally prove evanescent under warm conditions. But when the weather is just right,  some of these hybrids produce flowers which are unmistakably yellow.


This year, that’s what ‘Roselette’s Child’ did. This peony has been in the garden for six years, but never before has it produced a flower as distinctly yellow as the one shown above. This peony blooms very early in the peony season, and its buds are sometimes destroyed by freezing. This year several of the buds did die, and the ones remaining gave the impression of being about to produce green flowers. But as the bud expanded, the green became flushed with yellow little by little. It’s been unseasonably cool this week – night time lows have been down in the lower 40s F.  Is that what allows the yellow color to develop? Or is it a case of the low temperatures suppressing the development of the pink which sometimes appears in blooms of this peony? Whatever the cause, I never know what to expect from year to year with this plant. But I would not complain if it looked like this every year!
Posted by McWort at 5:20 PM