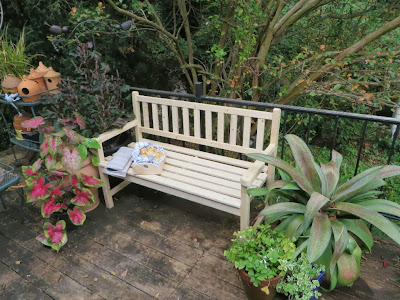 Back in February I got an irresistible offer from Tidewater Workshop, the manufacturer of Atlantic white cedar garden furniture: their basic four foot bench was being offered for a price that was hard to resist. The ad mentioned that there might be a delay in delivery. I placed an order for two benches, and a few days later the charge appeared on my credit card bill.

This has been such an eventful year in our household that I hardly noticed as the weeks passed. Soon, it had become a matter of months passing. Concerned, I tried to contact the company. Many repeated phone calls brought only a recorded message. Messages left went unanswered. An attempt at email resulted in a bounced message. At this point I began to be concerned, concerned not just for my money but also for the health of this company which produces a unique product. The economic downturn has hurt so many small companies which deal in horticultural and garden related products; many nurseries and mail order companies have either shut down for good or have reorganized, sometimes beyond recognition. Was Tidewater about to be swallowed up in the decline?

Yesterday my sister came over to give me some time to get out and get some fresh air. Before leaving the house, we sat around and talked for a while, mostly of the ebb and flow of family matters. At a lull in the conversation, I mentioned the bench saga; the most recent episode of that story being the results of a Google search on the company’s name.  It quickly became apparent that I was not the only one waiting for benches. It sure seemed that Tidewater had tanked, and that I would never see my benches or my money.

What happened next would have been considered an improbable deus ex machina maneuver in a play or novel, but this time it was real life. I got my things together to leave the house, got into the car, slowly began to back out, and noticed a small, nondescript pickup truck approaching. I pulled back into the driveway to allow it to pass; as it got closer, I got a look at what was in the bed of the truck.  It was the color of the wood which caught my eye first: the truck was hauling something made of recently  cut conifer wood. As the truck slowly pulled by me, I could see that the somethings were benches. I didn’t recognize the driver or the truck, but it sure looked as if one of the neighbors had been out shopping for garden benches. And then the truck slowed down, turned around and parked next door. By this time I had already started to pull out of the driveway, but my mind was racing and something deep in my consciousness kept saying, unlikely as it seemed,  “don’t go, don’t go, those might be your benches”.

I got out of the car and walked over to the truck. I didn’t see anything on the truck to suggest that it was from Tidewater, but as the driver got out I called out in a questioning tone “Tidewater?”  The driver, Peter, gave me a big smile and began unloading benches.  There was an older man with him: Peter introduced him as his dad. Why, I wanted to know, wasn’t dad at home sitting in the shade instead of unloading benches from a truck?

I couldn’t believe it: only twenty minutes before I had been telling my sister the sad tale of the benches. Now, totally unexpected, here they were. I was happy, I was a little confused: this sort of surprise was so much more exciting than the anonymous drop off from one of the major delivery companies.  And Peter turned out to be so affable and  upbeat. I told him about my problems contacting the company, about my concerns that it might not still be a going concern; he gave me a quick rundown of the reorganization efforts his company is making as they respond to new markets and new ways of doing business in the age of the internet. They are a thriving company and have plenty of orders to keep them busy. All the while we were moving the benches to our lawn, Peter was giving some bench care instructions: he cautioned me that my intended use, to use the benches indoors by the fireplace in the basement, might result in the wood drying too quickly and eventually developing small splits. He suggested taking some sandpaper to the rough edges, and painting or coating the benches. He kept referring to the wood as cypress, Maine cypress I thought I heard him say, and just as I began to wonder if he knew his woods, he mentioned “but it’s all Chamaecyparis thyoides”. Bull’s-eye: for those of you not into dendrology, that’s Atlantic white cedar.

By now my sister had joined us, and Peter gave us a good laugh when he said he didn’t have any trouble deciding  which house should get the delivery : it's always the one overflowing with plants, obviously.

The change I like best is their delivery system: it was great to be able to meet Peter and share his enthusiasm for his company and what they are doing.

Now I’m off to make some biscuits to put into the little tray provided, gratis, with the benches.

So is that an agave in the pot by the bench?

It's the plant known as × Mangave 'Macho Mocho'.
If you take Agave and Manfreda to be congeneric, then yes, it's an Agave.