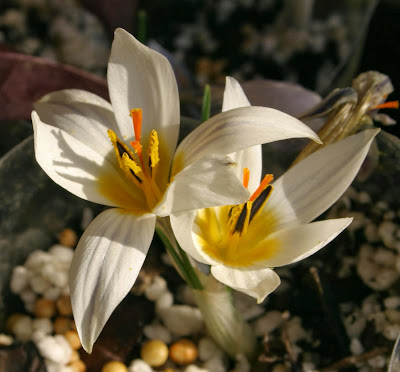 Forms of Crocus biflorus have been in cultivation for over four hundred years, although I don't think it has ever become a common crocus in American gardens.  Almost all of these bloom in late winter with the other "spring" crocuses. The one shown above is an exception: it blooms in November. The black anthers and the season of bloom make it hard to confuse with any other crocus likely to be seen in local gardens.
I acquired this in 2005, and for several years it bloomed faithfully on schedule. Then it disappeared. A season or two later, it reappeared about a yard from the place where it was planted. Then a year passed with no bloom, and I thought it was gone for good. But this year one flower appeared mixed with some other crocuses which once grew near the original site for Crocus biflorus melantherus. I photographed that flower yesterday, but when I examined the image, I realized that one of the tepals was torn. So I've substituted an image from 2006.
Posted by McWort at 11:24 AM