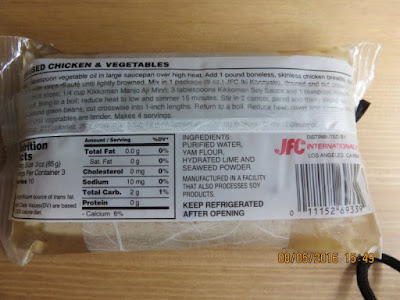 The botanical name konjac should be pronounced kon-yak: what looks like a "j" is the symbol used in botanical Latin to represent the "'ya" sound. See the top  image where the name is given as konnyaku. The bottom image shows the plant in bloom years ago - that was a big one!

The flowering of the titan arum at the U.S. Botanic Garden has brought on a tizzy of chatter about its smaller relative, Amorphophallus konjac. This can be grown as a garden plant here, and it usually survives the winters here without problems.

In the  image above you will see a package of what's called "yam cake" - it's made from the starch derived from the corms of Amorphophallus konjac. This plant is widely grown in Asia as a field crop (forget shade!) for the starch derived from its corms. I've even read about a small production effort going on in California.
Years ago I dug some corms in the fall and stored them on a shelf in the basement. Months later, in the middle of the night there was a loud crashing sound in the basement. I thought at first that a raccoon had gotten into the house and was knocking things down.  I went down to investigate and found nothing suspicious. And then I saw it: one of the large corms had started to sprout, and it had pushed itself off the shelf making the crashing noise as it came down.
The really repellent odor of the inflorescence comes from the spadix (the thing sticking up in the middle of the "flower") . Cut that off and you can enjoy the spathe (the calla lily thing) indoors without the odor: just what some might want for a goth wedding.
Everyone calls these and the "flowers" of the titan arum flowers. Actually, the true flowers are tiny little yellow bumps on the base of the spadix buried deep inside the spathe. In this case what we call the flower is actually the entire inflorescence. But then, a daisy is also an entire inflorescence and not a true, single flower; and we all call it a flower.
Posted by McWort at 10:34 PM

Very good, but I think that it has a tuberous rootstock, not a cormous one.

Juno, the terminology used for those structures varies from author to author. For instance, among orchid growers, the corm is typically called a pseudobulb. Among aroid enthusiasts, as you know, it's typcially called a tuber. Tulips have bulbs but the core of the bulb is a corm. Cyclamen, which are dicots and only remotely related to most of the plants which have bulbs (in the very broad sense), grow from what is generally called a tuber.
What all of these structures have in common is that they are the true perennial stem of the plant in question. They are usually the only part of the plant which persists from year to year. Sometimes these collapsed, condensed stems are intermediate between the rounded bulb-like corm of a crocus and rhizomes.
Since they all have the same function, I give them all the same name, corm.