Happy New Year from the garden 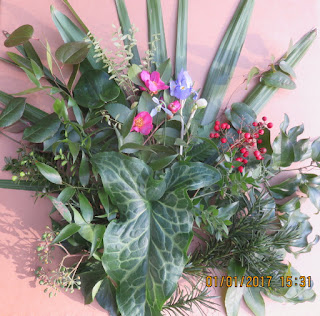 So little was in bloom in the garden this New Year's Day that I decided to build a New Year's Day display which emphasized foliage. Luckily I have plently to choose from in the foliage department.
But first the flowers: pink Camellia sasanqua is the brightest one in the garden today: these flowers are from a home-grown plant grown from seed planted in the mid 1970s.  The other blooms are the blue Algerian iris, Iris unguicularis, blooming this week for the first time this season (which is to say, late for this plant). There is a snowdrop, the Galanthus elwesii form I call 'Thanksgiving' because in most years it blooms on that day. This year it started a week or two after Thankgiving Day and has continued in good form until now. There are other snowdrops blooming now, too. There is a bud of Helleborus niger: they too are late this year.
Now for the foliage: see what you can pick out. Cephalotaxus harringtonia 'Fastigiata', Hedera helix, Rhapidophyllum hystrix, Smilax pumila, Smilax walteri, Smilax laurifolia, Smilax smallii, Laurus nobilis, Rohdea japonica, Euonymus fortunei, Dryopteris goldiana, Vaccinium myrsinites, Buxus sempervirens, Fatsia japonica, Asarum maximum, Ruscus aculeatus, Danaë racemosa, Arum italicum, and fruit of Nandina domestica.
The Smilax walteri and S. laurifolia were collected as seed in far southeastern Virginia during a birding trip Wayne and I took in the early 1990s.