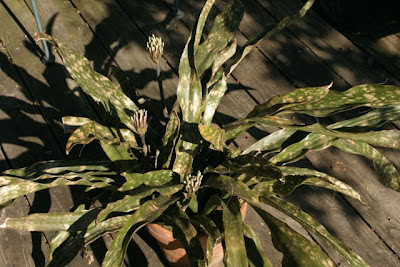 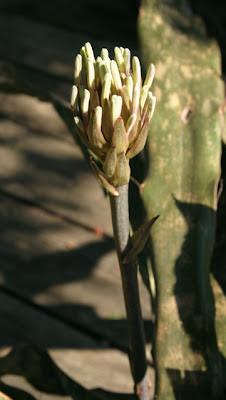 Years ago, probably at least twenty-five years ago, I was touring a local garden when I spotted a plant which stopped me in my tracks. At the time, I was growing some of the older Cryptanthus hybrids with large leaves in leaden colors. There in front of me was a plant I couldn't place. It sort of looked like one of the Cryptanthus, but then again it didn't. It sort of looked like a bromeliad, but not really. What was it? I asked, and the answer surprised me more: it was a Sansevieria, in particular one known as S. kirkii pulchra. I was so intrigued I forgot my manners and immediately begged a piece.
It's as easily grown as the other common members of the genus, and here it blooms almost yearly in autumn. The plant stays outside all summer, and in most years is still outside in November. I keep it outside as long as hard freezes don't occur. More than once the developing flowers have been frosted: that's not good! If the flowers are fragrant, I have not noticed it yet. I keep checking them at various times of day, but so far no fragrance.
Two of my high school teachers had the coolest rooms in the school. Miss Cross, the music teacher, had a second floor suite of rooms all to herself. All of the windows on the long side of the largest room had planters of Boston ferns. Miss Boyer, the biology teacher, had a big room with a massive old aquarium bigger than a bath tub. That room also had Sansevieria, the familiar S. trifasciata. When I returned to school after the summer break, I would notice the dried scapes of the Sansevieria: they had bloomed during the summer when the school was closed. I assume they sat there dry and neglected all summer.