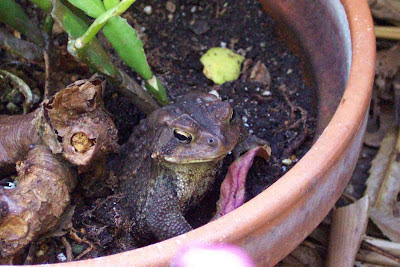 Wayne was moving pots on his patio the other day, and this head popped up to say hello. Luckily he had his camera handy. Wayne's garden is right beside Rock Creek Park, too, so we get some of the same visitors. It's been so dry this year that very few toads have been seen. That's true for slugs, too, although I can't imagine anyone regretting the lack of slugs.

Of all the woodland sprites which occasionally visit our gardens, for me toads are the most welcome. They congregate in the lily pool yearly to breed. There will come a time, usually in April, when there will be dozens of them clumsily splashing around in the water. The males will be singing, some hidden in waterside vegetation, some right out in the open. This goes on for several nights, and then in much smaller numbers for weeks. Soon the pool swarms with tiny black tadpoles, and then the day comes when the ground in the garden is alive with what at first glance look like hopping flies. I try not to go out into the garden during this time because it's just about impossible to move without stepping on a baby toad.

One of the pleasures of late winter is to sit in the garden on a mild night and listen to the toads moving slowly up through the garden to the pond. You have to listen carefully because all you'll hear is the occasional leaf moving. The males seem much less cautious than the females, and typically they arrive at the pond first. Nor do the females seem to linger at the pond as the males do.

After a shower on a mild late winter or early spring evening, parts of Beach Drive in Rock Creek Park will be littered with dead and dying toads. Don't drivers ever look down at the road?
Posted by McWort at 8:55 AM

Email ThisBlogThis!Share to TwitterShare to FacebookShare to Pinterest
Labels: toads