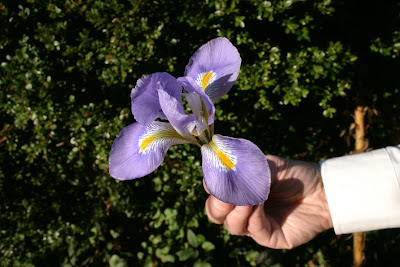 The tradition of making lists of plants blooming on Christmas or New Year’s Day is one which has never really caught on in our climate. Winters here have generally been too severe to make it worthwhile. Yet recent winters have more people giving the garden a careful look during the holiday season.

This year the garden has given me an utterly unexpected gift: late this morning I noticed a newly opened flower of Iris unguicularis, the Algerian iris. This particular plant has been blooming since sometime in November. It was obtained in the summer of 2005, planted against the house wall with a SW exposure in the rain shadow of the eaves – and then forgotten. It first bloomed in late November of 2006: that first flower (shown above) was improbably big for something blooming outside at that time of year.

This area is not Algerian iris country. English writers from Gertrude Jekyll a century ago to those of the present have celebrated this beautiful plant, and many American gardeners have tried to grow it. I certainly did several decades ago; but that trial, although it resulted in healthy, robust plants, produced not one mature bloom. There were buds, but never a flower. The buds always froze before they opened. I eventually gave up on the plant.

Then another local gardener had a repeat of my luck: he tried the plant and it never bloomed for him. He dug the plant, divided it up, and offered the pieces at a meeting of our local rock garden group. I was not the only person to take a piece, but as far as I’m aware I’m the only one who has reported success with it. The very mild weather has a lot, maybe everything, to do with it.

Now that I’ve seen what this plant can do, I might make room for it in the protected cold frame. That way, if typical winters return, I’ll still have these amazing blooms to brighten the shortest days of the year.
Posted by McWort at 7:42 PM