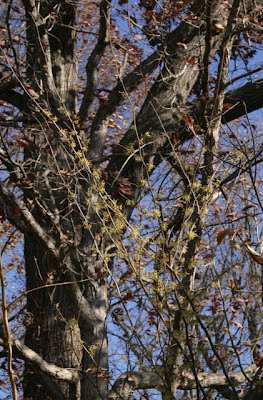 I was standing in the kitchen the other day absentmindedly looking out over the garden. An unexpected cloud of yellow caught my eye: hundreds of soft yellow witch hazel flowers were blooming. The yellow was unexpected because the witch hazel which grows in that position is the orange-red cultivar ‘Feuerzauber’. What I was seeing were some maturing sprouts from the stock on which the named cultivar had been grafted.

If someone had told me about this happening in their own garden, I probably would have suggested that the yellow flowers were those of Hamamelis virginiana, a species sometimes used as a stock for choice cultivars. But now that I’ve seen these in my own garden, I wonder. Hamamelis virginiana as I know it as an element in the local flora has much smaller flowers than the ones I’m seeing on the plants now in bloom. But what other Hamamelis would be blooming at this time of year with plain yellow flowers?
Posted by McWort at 3:04 PM