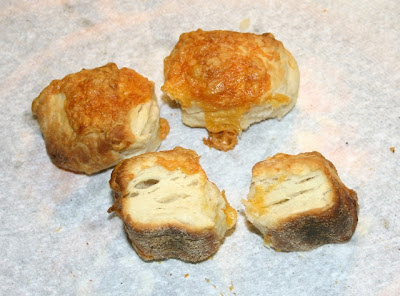 To the extent that frequency of consumption is a criterion, biscuits must be my favorite food. There can not have been many weeks in the last forty years of my life when I have not made biscuits at least once. Although it takes only a few minutes to make them, and you can attend to other morning things while they are cooking, they really are not suitable to work mornings. A good biscuit deserves generous treatment, both in the matter of accompanying spreads and in the time allotted to their enjoyment.
As it turns out, there are several schools of biscuit making. The prevailing school demands soft flour, minimal handling of the dough, buttermilk and baking soda. I’m not an adherent of that school. My biscuits are made with butter, milk, aluminum-free baking powder and unbleached, all purpose flour (a flavorful flour can make a world of difference). They get a lot of handling: they are, in effect, a variation of what is sometimes called rough puff pastry. The dough is kneaded until it is very tight. If I’m preparing them for company, during the last few minutes of kneading the dough is not folded: the rolled dough is cut in half, the resulting halves are neatly stacked, and then the rolling and stacking is continued until I’m satisfied. If I’m making them for myself, I sometimes omit the stacking step. The biscuits in the image were not stacked. In either case, for the final rolling the pastry board is sprinkled with white corn meal. This seemingly minor detail adds an unexpected and delicious element to the finished biscuit. After this final rolling, the block of dough is cut with a knife into squares or rectangles.
The biscuits are then arranged on a baking sheet sprinkled with more white corn meal and cooked in a hot oven (in fact, typically in the gas grill outside at maximum heat) until they begin to smell delicious. Typical recipes call for ten or so minutes: that’s fine if you like raw dough. I’ve been known to cook them until the edges begin to show minute black flecks.
The biscuits in the image show a frequent variation: they were topped with grated cheddar cheese before being baked.
A plate of these biscuits makes a wonderful way to fuel up before a busy day of garden work.
Posted by McWort at 3:55 PM

Email ThisBlogThis!Share to TwitterShare to FacebookShare to Pinterest
Labels: biscuits