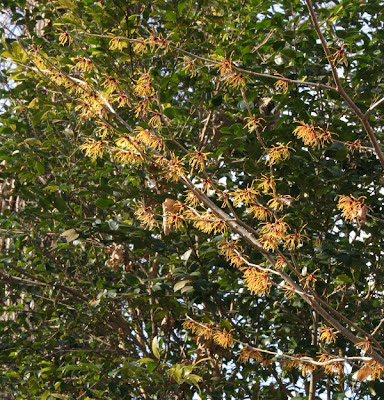 I’ve spent most of this week tackling various clean-up jobs in the garden. The weather has been perfect for working outside. It always amazes me how much stuff comes down out of our trees. Much of what I should have done last fall never got done because of the odd weather then: it was hot and humid right through October. Then suddenly the weather changed, and we went from hot and dry to much cooler and rainy. The rain went on and on – and outdoor work came to a halt. I’m trying to make up for it now. Accumulations of debris (sticks, leaves) have obliterated pathways; that took plenty of cleaning. A section of wall collapsed last year and was finally rebuilt today. The pergola went down in a pre-Christmas wind storm: I’m still struggling with getting that back in shape. A gift last year of some nice slate slabs finally is being put to use in rebuilding some steps in the garden. Dead stems need to be cut down, and the various beds require a lot of cleaning. So I’ve been busy.

What a day this has been. At 7:30 this morning the temperature was about 50ºF. Throughout the day the temperature dropped slowly to the accompaniment of harsh wind. I worked out in the garden for a few hours: the wind never quit. Trees began to shed dead branches. The forecast for tomorrow morning is for temperatures in the low teens. This sudden drop will catch the garden’s first round of early risers: there are plenty of snowdrops, hellebores, witch hazels and even a crocus or two already in bloom.

It’s now about 4:30 P.M.; the wind is relentless. I’ve closed the cold frames and covered the protected cold frame. There is nothing I can do for the plants in the open garden: they’re on their own. A sudden drop in temperature will damage even tough flowers such as hellebores and snowdrops.

A good garden should keep the interest of visitors for at least a while. But it’s a real event when your own garden gives you a surprise. I had that experience yesterday, when I saw a familiar plant in a way which was both entirely new and very exciting.
Hamamelis ‘Jelena’ is in full bloom now. This cultivar has comparatively big flowers which from a distance seem to be orange. Up close, the flowers look like a mixture of the stringy zest of oranges and lemons. Although the flowers are large and colorful, they do not have the strong scent for which some cultivars are noted.

There are two trees of ‘Jelena’ in the garden. Each is planted very near the back border of the property. As a result, I see them only when I am working at the back of the garden. The better of the two in fact grows on the far side of a substantial clump of camellias and is all but invisible from the rest of the garden.

This afternoon, I was out in back of the garden, at the edge of the woods, enjoying the view down into the valley of Rock Creek. As I turned around to return to the garden, I caught a glimpse of Hamamelis ‘Jelena’. It was beautiful, even glorious, in a way I had never seen before. From that angle, the witch hazel was seen backed by the clump of camellias. The dark green foliage of the camellias formed the perfect background for the brilliant orange blooms of the witch hazel. Never before had they seemed so bright and colorful. The image above gives an idea of what I saw, but it really does not capture the effect because the image was taken later when the camellia foliage was illuminated by the sun and thus did not provide such an effective background.