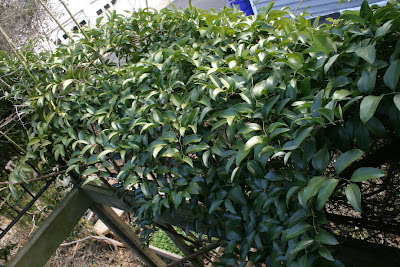 Last week I attended a talk in which Lindie Wilson, who came to own Elizabeth Lawrence’s last home in Charlotte, North Carolina, told us about her efforts to preserve the garden. Those efforts were successful, so much so that the property has been acquired by a trust and will be preserved into the future. For more about this, see:
http://www.elizabethlawrence.org/

There are a number of Elizabeth Lawrence plants in my garden – plants which I first learned about from reading her works or which for other reasons I associate with her memory. One of my favorites is a two-for: a plant I associate with the late Henry Mitchell and with Elizabeth Lawrence. It’s the Jackson vine, Smilax smallii. I regard it and Smilax laurifolia as the most magnificent vines native to North America, yet they are hardly known outside of their natural range in the south-east and south-central states.

Although I had known about Smilax smallii for years, I did not know of a source for it until I happened to mention it in 1987 in the presence of a stranger who not only knew the plant but told me where to obtain it: Woodlanders, of course. Soon several feet of slight vine attached to what looked like bananas arrived in the mail. These were given a prime spot in the garden: on the south side of the house against the chimney. It was a good choice. Now, nearly twenty years later, the vine has run up to the roof of the house and hangs out in graceful evergreen swags of handsome foliage. Each year new sprouts rise from the ground and go right up to the roof and more.

Smilax smallii is thornless (or nearly so) and its flowers are fragrant. It has never matured seed in my garden; presumably the developing seed is killed during the winter. This plant carries its foliage in the most graceful way. Each spray of foliage forms a triangle a yard or two on each side; the leaves are disposed neatly and regularly throughout the area of this triangle. Cut branches retain their form and gloss well; I’ve read that in the old days railroad carloads of cut stems were sent north for the holidays.

Take a careful look at that famous picture of Elizabeth Lawrence welcoming us into her garden. On the arch over the gate grows a robust Clematis armandii. If you look carefully at the lower right side of the gate, you can make out a young Smilax smallii getting started. In fact, if you look very carefully you might be able to make out its stems pushing up into the clematis.

After the talk I asked Lindie Wilson about the smilax: she told me that the smilax was gone from the gate when she arrived – but that it now covers the front of the house. More of us should follow Elizabeth Lawrence's example in this.
Smilax laurifolia also grows in my garden. Raised from seed and now about fifteen years old, the largest of several plants is only about seven feet high. It has the potential to go to the tops of trees. In the wild, mature plants of this species are awesome.
Posted by McWort at 5:02 PM